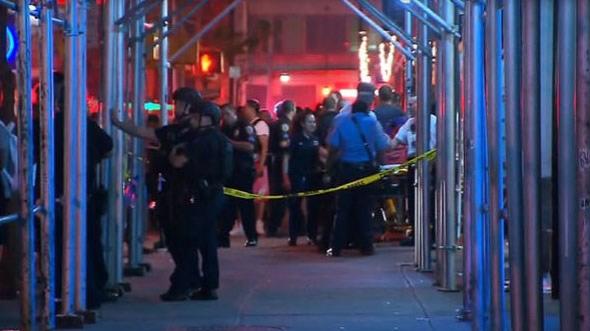 Police say 30-year-old Roland Collins was arrested Thursday on weapons, menacing and reckless endangerment charges. They say more charges are possible in the shooting of Ronald McPhatter, 33, who was found near the bar of the VIP area with a fatal gunshot wound to the stomach Wednesday night.

The Brooklyn-based performer goes by the stage name Troy Ave. He was also shot in the leg Wednesday night.

It wasn't immediately clear if Collins had an attorney who could comment on the charges. A message left at a number listed for him hasn't been returned.

The shooting occurred shortly after rapper Maino entered the VIP area following a performance onstage with artist Uncle Murda, though investigators don't know whether the rappers played any role in the shooting, Chief of Detectives Robert Boyce told reporters outside the concert hall.

Video and witness statements showed "fisticuffs broke out and then gunplay thereafter," for roughly five minutes, he said.

In the surveillance footage, police said, a man can be seen firing off one round just outside a green room -- a performers' lounge where there were no security cameras.

Five 9-mm shell casings were collected at the scene, though it's not clear whether there was more than one shooter, Boyce previously said.

Investigators described the shooting as particularly brazen: There were nearly 1,000 people in the concert hall and at least one of the victims, Christopher Vinson, 34, was shot in the chest on the venue's ground level after a bullet traveled through the floor, Boyce said.

Ronald McPhatter, 33, was found near the bar of the VIP area with a fatal gunshot wound to the stomach, Boyce said.

Witnesses described a frantic, frightening scene at the venue, noting lax security to get in. Detectives are investigating whether the security, which included metal detectors and guards, was adequate, Boyce said.

"It was a stampede," one man told CBS New York. "Everyone was trying to save themselves."

"Just chaos," said another concertgoer. "We ran outside, thought it was okay, then we heard more shots so we just kept running."

Concertgoer Liv Hoffman told The Associated Press that a woman next to her in the balcony VIP area was shot at close range, then carried out by some men.

"For two to three minutes, we still heard firing, still heard shots," she said. "We were clutching each other making sure no one was getting hit."

Police Commissioner William Bratton said in a radio interview with WCBS that it was unclear so far whether anyone in the performers' entourages was involved, and many were unwilling to talk with police.

"Basically thugs that basically celebrate the violence that they live all their lives and unfortunately that violence often manifests itself during the performances and that's exactly what happened last evening," he said. "The music, unfortunately, oftentimes celebrates gun violence, celebrates the degradation of women, celebrates the drug culture and it's unfortunate that as they get fame and fortune, that some of them are just not able to get out of the life, if you will."

The comments prompted an angry response from McPhatter's relatives and a city lawmaker, who derided the comments as insensitive and divisive.

"When white people are doing this violence, I don't hear the same language being used," said City Councilman Jumaane Williams, a Brooklyn Democrat who said he had worked on anti-violence initiatives with McPhatter and his older brother, Shanduke McPhatter, a former gang member.

The city's mayor, Bill de Blasio, said afterward that he believed Bratton was "talking out of frustration."

"I think it's not really right to see a whole genre through one eye," he said. "There are some rap artists and folks in the hip-hop culture doing amazing, good things for the world."

Collins was in custody and couldn't be reached for comment Thursday. It was unclear if he had an attorney who could comment on the charges against him. A message left at a phone number listed for him wasn't immediately returned.

Shanduke McPhatter said his brother "got too much into" the glamour of the hip-hop scene, and it landed him Wednesday night in an environment where alcohol flowed freely and trouble broke out.

Police said there was no evidence connecting T.I. to the violence, but the incident marks the third time in a decade that shootings have occurred during or after concerts where the Grammy Award-winning musician was to perform.

A member of the rapper's entourage was killed and three others were injured during a gunbattle following a party after a concert where T.I. performed near Cincinnati in 2006. Last March, two people were shot and injured in a Charlotte, North Carolina, nightclub where he was to perform.

In 2010, the Atlanta rapper was sentenced to 11 months in prison on federal gun charges.

T.I. released his debut album in 2001 and became one of rap's success stories on the pop charts, thanks to Top 10 hits such as "Bring 'Em Out," ''Whatever You Like" and "Live Your Life" with Rihanna. He has won three Grammy Awards and appeared on screen in a number of films, most recently "Get Hard" opposite Will Ferrell and Kevin Hart.

He also appears on the VH1 reality show, "T.I. & Tiny: The Family Hustle," with his wife and children.