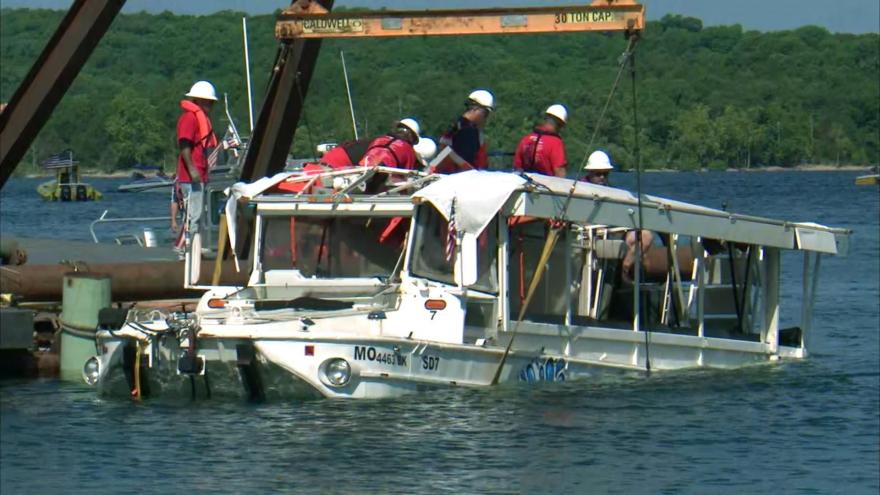 A duck boat that sank in Branson, Missouri, is raised out of the water.

(CNN) -- Ripley Entertainment and Ride the Ducks Branson are to blame for the 2018 sinking of a duck boat in Missouri that killed 17 people because managers did not relay a severe weather forecast to the vessel's captain, federal investigators concluded Tuesday.

The nearly two-year long National Transportation Safety Board probe found a "systemic problem with the company as a whole," an investigator said at a board meeting Tuesday.

The board decided against specifically naming the captain of the Stretch Duck 7 in its findings of fault.

"You can't know what you don't know," NTSB Chairman Robert Sumwalt said, noting that when the vessel arrived at the shore of Table Rock Lake on July 19, 2018, "it was glassy smooth on that lake."

But while the amphibious vehicle, a World War II-era boat refitted to carry sightseeing passengers, toured the lake, the heavy storms that forecasters warned of arrived. The boat began taking on water due to unusually large waves.

Ripley Entertainment said it would review the NTSB report as soon as it's available.

"Branson Ride The Ducks fully cooperated with the NTSB's investigation into the accident that occurred in July of 2018," the company said in a statement. "We remain dedicated to working with the community of Branson, and continuing our support of all those who were impacted by the accident."

The Coast Guard did not immediately to CNN requests for comment on the findings.

The captain and company's general manager did not agree to interviews because of ongoing criminal investigations, the NTSB said.

This story has been updated with a statement from Ripley Entertainment.