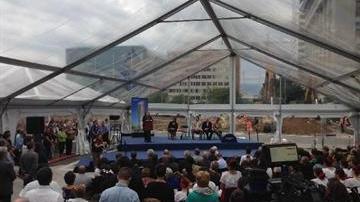 MILWAUKEE -- Tuesday is the official kickoff but they joked that they couldn't do a groundbreaking because there's already a big hole in the ground.  Beyond that - Northwestern Mutual officially kicked off construction of its new downtown building.

They pulled a lever and it released streamers into the air.  The new tower ensures around 1,100 jobs stay downtown while also adding 1,900 new ones.

There were dozens of city and community leaders on hand.  Northwestern Mutual also had hundreds of employees here.

NML released the plans almost a year ago.

Northwestern Mutual CEO John Schlifske said he's most excited about the open door policy with the Milwaukee community.  He said the gardens, green space and other amenities will attract people downtown.

Schlifske says the new building will be a door to Lake Michigan too.

Mayor Tom Barrett talked about how challenging it was to get to this point. He and NML CEO John Schlifske had a big decision to make about the future of NML and Milwaukee.

\"He could have made a decision that this beautiful new building would have gone anywhere,\" Barrett said.  \"But he made the decision, along with his board of directors that this building will be built right here.  He made that decision, I believe, because he believes in this city.\"