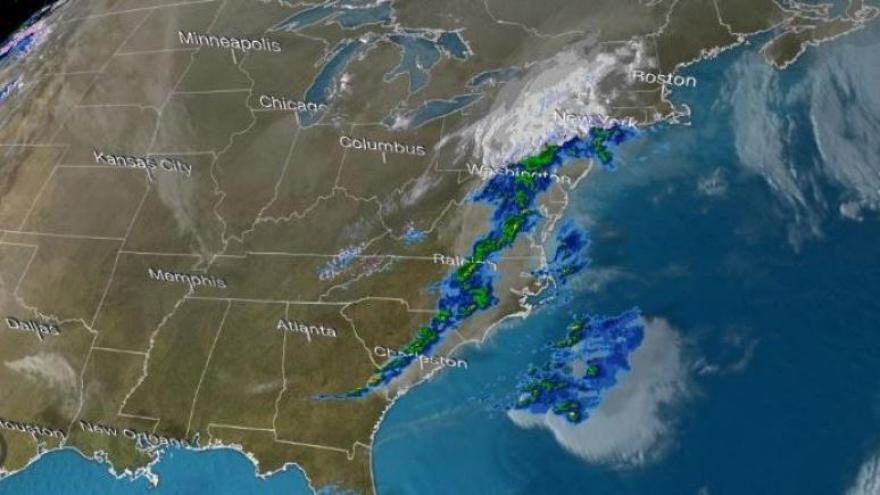 (CNN)The Northeast is hunkering down for what could be the most significant storm of the season, which is forecast to dump a foot of snow and bring blizzard conditions in some areas Thursday.

Airlines have canceled more than 2,700 flights ahead of the storm. New York, Boston and Philadelphia have closed their public schools for the day. The latter two cities have also declared snow emergencies, which affect city services and parking. All state offices in New Jersey have been closed for non-essential personnel.

More than 60 million people will be dealing with the wintry weather, said CNN meteorologist Pedram Javaheri.

Winter storm warnings are in effect stretching from Pennsylvania, through parts of New York, New Jersey, Massachusetts as well as the New England states.

The storm is expected to bring strong winds, hitting around daybreak with 30-mph winds and creating whiteout conditions at times, CNN meteorologist Dave Hennen said.The National Weather Service estimated that seven to 11 inches of snow in New York and 10 to 16 inches of snow in Boston are possible.

Officials warned residents to avoid morning travel as heavy snow can make roads slick and dangerous. The National Weather Service in New York warned that the conditions will "rapidly deteriorate around daybreak" and that two inches of snow could fall per hour.Flightaware.com reported that airlines had canceled more than 2,700 flights affecting the United States on Thursday. Most of the cancellations are in Newark, New Jersey; Boston; and New York's LaGuardia and JFK airports.

The good news is that the storm is expected to move out quickly. However, snowfall in Boston could continue into the weekend, and temperatures won't rise above freezing there until Sunday, according to the National Weather Service.

The storm won't cause hardship much below Washington. It will get less than half an inch of snow Thursday morning, according to the National Weather Service.New York Mayor Bill de Blasio tweeted Wednesday night that his city would close its schools. About 1 million students attend the city's 1,800 public schools.Boston Mayor Martin Walsh said the city's public school system would be shut Thursday, and he urged people to be "looking out for your elderly neighbors, disabled neighbors, neighbors who might not be able to help themselves." Boston has 125 public schools attended by about 56,000 students.

The School District of Philadelphia, which has 134,041 students, is also closed for the day.

Connecticut Gov. Dannel Malloy said state colleges and courts would be closed. "This is a serious challenge when you talk about 8-14 inches" of snow, he said.

Several colleges in the Northeast including all City University of New York (CUNY) colleges, Rutgers in New Jersey and MIT in Massachusetts are closed Thursday.The storm is expected to pack a punch, but it's not a nor'easter.

Nor'easters get their name from the winds that blow from the northeast ahead of a storm's arrival as it moves up the Eastern Seaboard, remaining offshore.

This storm will move from west to east, from land out to sea, so it can't be classified as a nor'easter.

The region did have a nor'easter on January 24. That storm jammed roads and caused major disruptions in air travel.New Yorkers will experience a bit of "weather whiplash" as they enjoyed sunny, warm weather on Wednesday.

Temperatures on Wednesday set a new record high of 65 at JFK International Airport, nearly 30 degrees above average for early February.

But the mild conditions proved to be short-lived as temperatures began plummeting overnight, paving the way for snow.