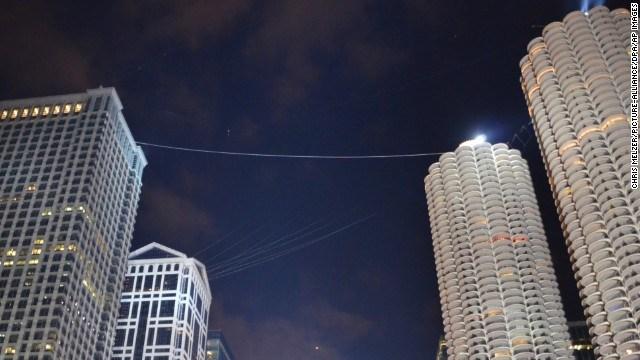 (CNN) -- Record-breaking daredevil Nik Wallenda will attempt on Sunday what he calls his most challenging feat to date: a tightrope walk between two skyscrapers 600 feet above downtown Chicago.

The seventh-generation aerialist's \"Skyscraper Live\" walk is scheduled to start at 7 p.m. ET and will air live on Discovery.

The walk will consists of two parts, starting from Marina City's West Tower, about 588 feet high. He will cross above the Chicago River to the Leo Burnett Building, finishing 671 feet above the street, according to Skyscraper Live's website.

After he returns to the West Tower, he will cross to the East Tower blindfolded as he braces against estimated wind gusts up to 50 miles per hour.

As a member of the famous Flying Wallendas, founded by his grandfather Karl Wallenda in the 1920s, Wallenda is no stranger to death-defying stunts. He walked across a wire 1,500 feet above a river in Arizona in June 2013, becoming the first person to traverse the gorge near Grand Canyon Park in Arizona. Before that, he made a record-breaking journey across Niagara Falls in 2012.

Peril also runs in the Wallenda family. Wallenda's great-grandfather Karl Wallenda was killed at 73, attempting to walk between two buildings in Puerto Rico in 1978.