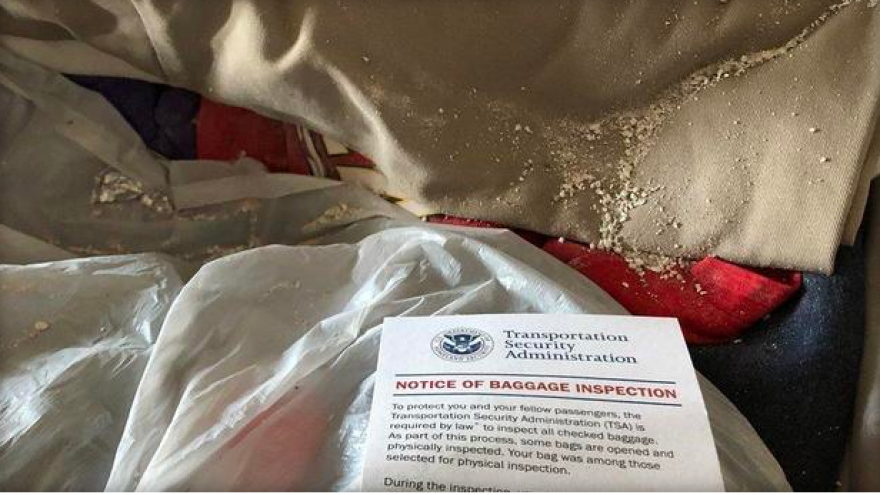 (CBS NEWS) -- New York Giants defensive tackle A.J. Francis says agents from the Transportation Security Administration (TSA) spilled his late mother's ashes in his suitcase during an inspection of checked luggage before a flight. Francis was flying from Arkansas after spending time with family following his mother's death last month.

On Monday morning, Francis tweeted about his frustration with the TSA, along with a photo showing the ashes scattered on items of clothing inside his luggage.

"Hey you pieces of [sh*t] @TSA next time you [a**holes] feel the need to go thru my mother's ashes for no reason, make sure you close it back so her remains aren't spilled on all my clothes," he wrote.

The photo included a flyer from the TSA informing Francis that his luggage was among the pieces of checked luggage that was inspected by agents.

He continued to tweet about the incident, saying he has no problem with the TSA checking his bag, but said the agents were "irresponsible" when handling the urn that held his mother's ashes.

"The craziest part of this @TSA [sh*t] is that I dont even care that they checked it... they were just being cautious, & I can understand that. But to not ensure that it won't spill back into my bag after you put it back in is the most asinine & irresponsible [sh*t] I have ever seen."

The TSA apologized to Francis on Twitter, replying with a link to file a formal complaint.

"Our officers are trained to handle your carry-on and checked property with care. Out of respect for the deceased, under no circumstances should the container be opened. Please accept our apologies and our condolences," the agency's customer service account said.

TSA spokesperson Michelle Negron responded to CBS News' request for comment Tuesday, saying they have yet to hear more details about the incident from Francis.

"TSA understands how painful losing a loved one is and we send our condolences to Mr. Francis," Negron said. "TSA officers treat crematory remains respectfully and out of respect for the deceased, TSA officers will not open a container with remains, even if requested to do so by a passenger at a checkpoint. TSA reached out to Mr. Francis via Twitter and included a link for him to send us a private message in hopes he would provide more details. Unfortunately we have yet to hear back from him."

If Francis provides flight information, a videotape review could help determine what condition the contents of the checked were in while it was in TSA's possession, TSA said in a statement.

Francis joined the Giants in May after playing for several NFL teams, including the Washington Redskins and Seattle Seahawks.