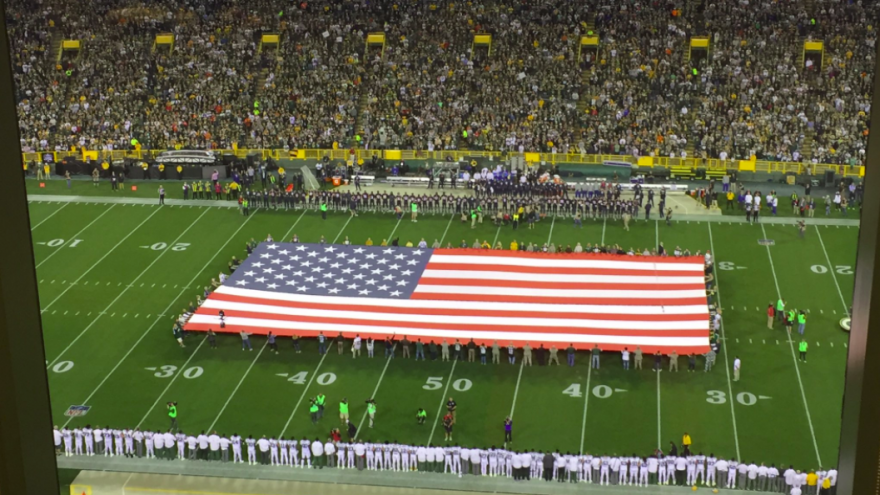 (CBS SPORTS) -- During a conference call with several members of the media on Tuesday, NFL spokesman Joe Lockhart stated that the league's owners will likely discuss a rule change that would require players to stand for the national anthem. "I think there will be a discussion about the entire issue, including the policy … I'm not going to predict what might happen," Lockhart said, per the Washington Post.

Players on several teams around the league have been sitting, kneeling, or otherwise demonstrating (i.e. raising fists in the air) before, during, or after the national anthem over the last year-plus as a protest against systemic racism and police brutality against people of color. Former 49ers quarterback Colin Kaepernick was the first to do so, and has since become one of two healthy quarterbacks to throw at least 200 passes in his age-29 season and not wind up on an NFL roster the following year. (The other was Bobby Hebert in 1990, but he was engaged in a contract holdout.)

After the president repeatedly issued public statements and posted tweets attacking NFL players that kneel during the anthem and called for NFL owners to fire any "son of a b----" that does so, teams across the league demonstrated in unison before and during the anthem back in Week 3. The issue has continued to draw national attention since then, and the president has continued to attack the NFL for its stance, stating that the league is disrespecting the anthem and flag.

The president has not commented on the actual issues that inspired the protests.

After a conversation with the president, Cowboys owner Jerry Jones said that any player that does not stand will not play, up to and including Dak Prescott and Ezekiel Elliott, who he was asked about specifically. Miami Dolphins coach Adam Gase said that any player on the sidelines for the anthem must stand, but that players have the option of remaining in the locker room or in the team tunnel during the anthem as well.

Lockhart's comments came after multiple teams, including the Dallas Cowboys and Miami Dolphins, instituted team rules this week that would punish players for not standing during the national anthem. Lockhart noted that the current policy – which is contained in the NFL Game Operations Manual that is distributed separately from the league's official rulebook – cited by Jones as his reason for mandating that Cowboys player stand during the anthem actually says that players "should" stand, not that they "must" stand, but declined to answer whether the league believes the current rule allows teams to punish players for not standing.

The owners are scheduled to meet next week in New York, and Lockhart stated that the issue will be "front and center" on the agenda. The Cowboys are on their bye and do not play this weekend so Jones will not have a chance to enforce his policy until after the league's owners debate whether or not he is allowed to do so.

"I think everyone at this point is frustrated by this situation," Lockhart said, adding: "The commissioner and the owners do want the players to stand."

Asked directly whether a rule change requiring players to stand would have to be done through collective bargaining, Lockhart responded, "I don't believe that the anthem per se is an issue that's collective bargained."