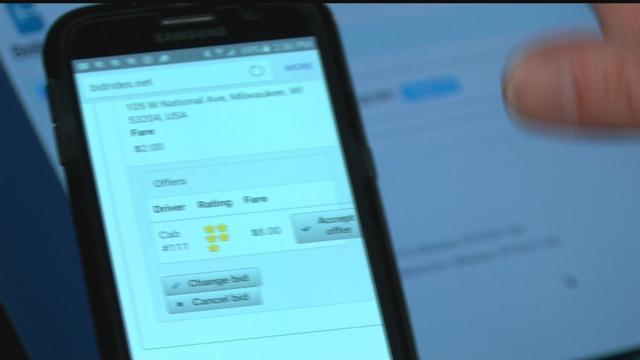 It's hailing a taxi, gone high-tech. A Milwaukee man came up with a way to do that, and make that taxi ride even cheaper. It's called "BidRide" and the name says it all. Think of it like "Priceline" but the trip you're bidding on may only be to the grocery store or home after a night out.

"I definitely do appreciate that," said BidRide user Lauren Cooper. "It does come in handy for after bars close when Uber just jacks up their rates to these ridiculous prices."

Cooper has been using BidRide for the last couple weeks and likes it. The concept was developed in Milwaukee, by native Wisconsinite Joe Sanfelippo.

"On your phone, the GPS automatically picks up where we are, with our location," Sanfelippo said as he described the process.

"But you can bid anything you want, so we can go to this ride and we'll back it up and we'll say I'm gonna offer a dollar," Sanfelippo said.

Your ride is either accepted or countered by the driver. They (drivers) are independent contractors, so if they accept the lower fare, it can really save you some money.

One of Lauren Cooper's preferences is trust.

"With the vetted cabs, you know, and the drivers with the background checks and all that. Little more of a sense of security than getting in to some random person's car," Cooper said.

BidRide is in the testing phase for the next couple of weeks and reps admit there are kinks that they are working out in time for the actual launch by month's end. However, while it's in it's testing phase, rides up to $20 are reimbursed to you if you fill out a survey about your experience. Right now, the process is done on their website www.bidrides.net, but there is an app in development and expected to be released by the end of the month or beginning of April.