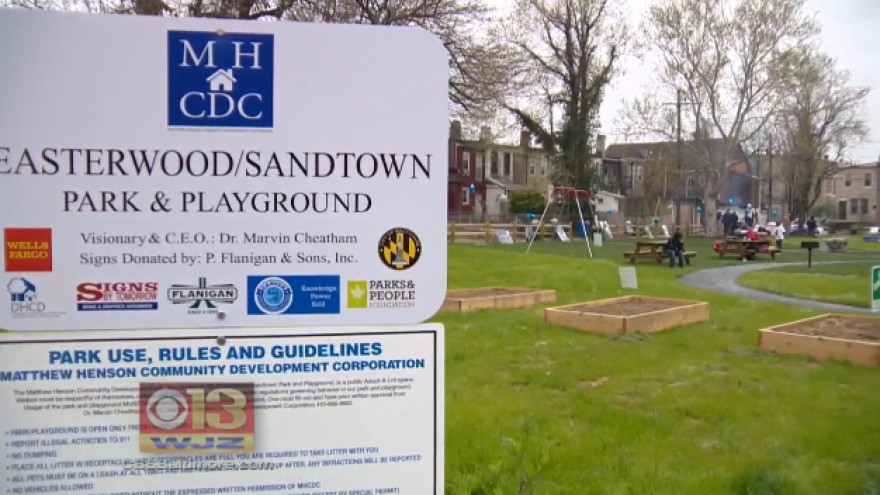 They’re calling it the “McKean Miracle.”

“It brings tears to my eyes,” says Lisa Schroeder with Parks and People.

A street once crowded with decaying homes now shares a block with the Easterwood Sandtown Park and Playground. This is the same community, hit with riots nearly two years ago, following the death of Freddie Gray.

The park has been designed, and even built by the community it serves. With some help from the city, state, and Parks and People.

“On the state side, we’re coming in to help bring down some of these properties. And the community tells us and their city leaders what it is they want with that space,” says Lieutenant Governor Boyd Rutherford.

The space is shining a light on the community. High school volunteers like Artaz Cotton built the chess stations and picnic tables.

“We’ve got a lot of negativity in this city, and it’s so amazing to see people just having fun, kids playing,” says Artaz.

This positive moment in stark contrast to just two years ago this week, when Freddie Gray was arrested in this neighborhood.

Community activists are now eager to turn a new page.

“This is a new day where the community can tell city officials and state officials: ‘If you all won’t do it, we’ll do it ourselves,” says Dr. Marvin Cheathem with the Matthew Henson Community Development Corporation.

The park is helping to bring a positive focus for a community still healing two years later.

“It’s fun because you’ve got lots of stuff that you can do at a park!”

Community organizers are now setting their sights on building up this area. They’re hoping to put in a market, pharmacy, community center and job training center right across the street.