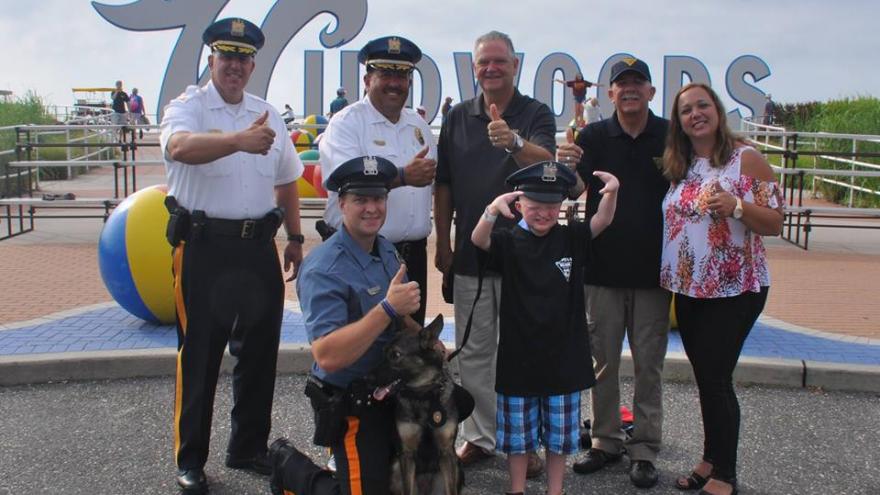 When Ethan Kranig and his mom Natalie planned a trip to the beach, they had no idea it would turn in to the trip of a lifetime.

Ethan, a 9-year-old from Wisconsin, has a rare disease called ectrodactyly ectodermal dysplasia. Children born with this genetic condition can experience a variety of issues including missing fingers and toes, a cleft lip and palate, and growth problems. In Ethan's case, one of his major symptoms is the loss of most of his eyesight. His mother planned a family trip to the beach last week in Wildwood, New Jersey, to make sure he would "see the sea" in his lifetime.

Little did they know, a New Jersey man named John Lynch had gotten wind of their story through a mutual friend. Lynch started an organization called Lunch with Lynch, which serves at-risk youth in his community. When he heard the family was making a trip to Wildwood, Lynch made it his mission to help them have the best experience possible using the connections he'd made through his foundation.

First, Ethan got to spend a day at the beach as an honorary life guard. He and his family also had a police escort through town. But when Lynch learned from Ethan's mom that his dream was to be a police officer, he organized an even bigger surprise. He called the local police chief, Robert Regalbuto, and asked if he'd meet with Ethan.

Chief Regalbuto offered something better -- to swear Ethan in as an honorary police officer in front of the entire department.

"When he walked up and everyone met him there was a crazy buzz," Lynch said. "It was an incredible vibe because it's hard to get everyone together ... I don't think I've had a day I was more proud to be an American."

"I can tell you that we both cried," Natalie Kranig told CBS News of the moment her son was sworn in. "I knew this was the most amazing moment for my son. My heart melts."

The video of Ethan's swearing in has since gone viral. For Natalie, who works as an EMT, and her family the outpouring of support comes at a moment when they need it most. Ethan has undergone 29 surgeries as a result of his disease, and the beach vacation was planned in coordination with a trip to Johns Hopkins for a follow up to his latest procedure. But her husband lost his job over a year ago, and the cost of Ethan's mounting medical bills and travel to Baltimore has caused the family home to go into foreclosure, Natalie said. They've set up an online fundraiser to help pay for Ethan's treatments.

"It's a terrible situation to choose between your mortgage payment or your son's vision," Natalie said. "It's hard for me, but he's always been a happy kid. I know these are memories I can refer back to when things get tough."

To make sure Ethan always has those memories and more, the Lunch with Lynch Foundation set up a drive to send first responder uniform patches to Ethan for his growing collection. He hopes to have a patch from every state one day.