New Furniture Could Be Putting Families in Danger 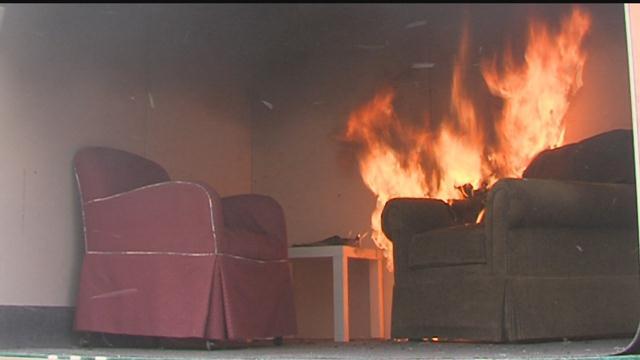 Furniture made today could be putting you and your family’s lives at risk.

You used to have 15, 20 minutes if not longer to get out of a burning home.

These days you've got three minutes tops from the time your smoke detector starts to blare to escape.

The West Allis Fire Department put out a fire that was burning inside a mock-up living room to show how all the cushion stuffing and the other materials burned fast and hot.

The Red Cross suggests having at least two ways to get out of every room.

Decide on a meeting place outside and figure out who will call 9-1-1.

In addition, they recommend having a home fire drill at least twice a year.

A fire sprinkler was tested during the demonstration and in less than a minute the sprinkler head closest to the fire started.

The same furniture that all but melted in the other fire hardly had time to burn in this one.

There was still smoke, but far less, which means a lesser danger to you and your family.

A home fire sprinkler system might cost you about two percent of new construction likely more if you're putting it in to the house you already live in.