New Forecasting Technique Could Predict Tornadoes Weeks Ahead of Event 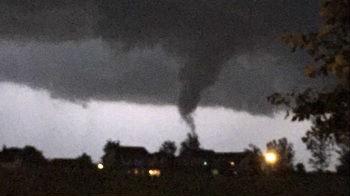 Some interesting information about tornadoes this week of Severe Weather Awareness in Wisconsin.  Can you imagine if you could forecast where a tornado would strike two or three weeks ahead of time?  It might be sooner than you think.

Victor Gensini, a meteorology professor at the College of DuPage, found a link between tornado activity in the U.S. and complicated atmospheric wave patterns shifting every 40 to 60 days.  The pattern is so reliable it predicted tornado activity 10 out of 15 times last year alone.

Typically, forecasters have a general idea where severe weather will strike five days before it happens.  But Gensini's study is based on something called "Global Wind Oscillation."  This is a collection of weather and climate patterns.  Gensini looks for shifts with the data, especially as we transition out of an El Nino pattern, like now.  He relies on the jet stream steering winds at 33,000 feet.  When they become more amplified from north to south, chances for severe weather are better.

Those with the new technology, called Extended Range Tornado Activity Forecasts (ERTAF), say this newly-discovered information is a good tool for public awareness and emergency management, but it should be used with caution as it's still in its development phase.

For more information on ERTAF, make sure to click on the attached link.