New Efforts to Improve Safety in North Side Neighborhoods 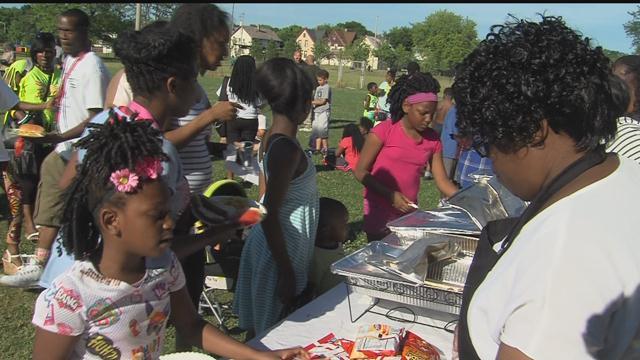 CBS 58-- People across the North side of Milwaukee spent Friday working to take back the neighborhoods, with stop the violence initiatives at Moody Park and 76th Street and Capitol Drive.

“This is something simple and small that can end violence especially in this area code,” said Akinyomi Courtney, who attended the Moody Park event.

Friday, Moody Park, a place that for years was boarded up and overrun with crime, reopened as a place where the community can feel safe.

You've got residents involved in taking responsibility for and pride in their own neighborhood,” said Tom Schneider, executive director of COA Youth and Family Centers, which helped with the project.

And on the eve of Father's Day weekend, organizers specifically asked dads to come out and be leaders in ending the violence.

“A lot of times we don't see the representation of fatherhood,” Courtney said. “And for this community that's highly important.”

People living in the area say the key to keeping criminals away is spending time outside getting to know your neighbors.

Over at 76th and Capitol, there was a rally with a similar message. The group stood outside asking people to get involved; join neighborhood watches and set up surveillance cameras.

“Get more people that are open to standing up when they see something suspicious,” said Ann Sturdevant, who helped organize the rally.

The group spent about five hours at the intersection raising awareness about the need for action.

“Everybody that lives in the neighborhoods, they're prisoners in their homes because of  the criminality, but now everyone has had enough,” said John Jeffery, another organizer of the rally.

The group is holding a meeting about the next steps on June 27 at 6:30 at the Enderis Field House. Any resident of the north side neighborhoods is welcome.