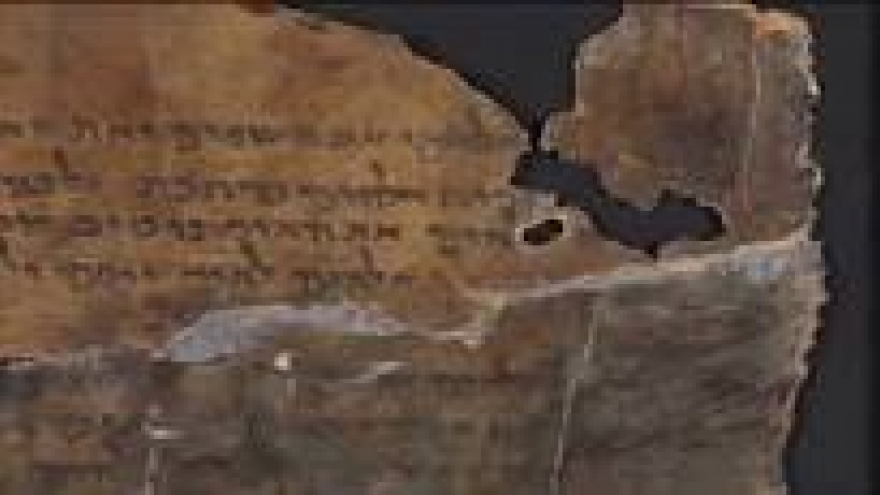 (CNN)Excavations on the storied Judean cliffside revealed a new Dead Sea Scrolls cave, full of scroll storage jars and other antiquities, the first such discovery in over 60 years.

The discovery upends a decades-old theory in the archaeological community that Dead Sea Scrolls were only found in certain caves at the Qumran cliffs, which are managed by Israel in the West Bank."Until now, it was accepted that Dead Sea Scrolls were found only in 11 caves at Qumran, but now there is no doubt that this is the 12th cave," said Dr. Oren Gutfeld, one of the project's lead archaeologists.

Pottery shards, broken scroll storage jars and their lids -- even neolithic flint tools and arrowheads -- littered the cave's entrance. Farther in, there appeared to be a cave-in.After a bit of work with a small pickax, the team made a monumental find: an unbroken storage jar with a scroll. It was rushed to Hebrew University's conservation lab, where it was unfurled in a protected environment.

It had no writing; it was placed in the jar to prepare it for writing.But the effort was not in vain.

Scientists soon discovered the cave-in was intentional and it hid a tunnel about 16-20 feet in length."At some point hidden in the tunnel, we found a few [three] broken storage jars with the lid," said Gutfeld. The team also found the cloth coverings and the leather strap that bound the scrolls the jars once held.

The team thinks looters ransacked the cave around the 1950s, pointing to pickaxes left in the tunnel as evidence.

"I imagine they came into the tunnel. They found the scroll jars. They took the scrolls," said Gutfeld. "They even opened the scrolls and left everything around, the textiles, the pottery."Over the last few years, researchers believe Dead Sea Scroll fragments made their way onto the antiquity black market. According to Gutfeld, that resurgence led authorities and researchers to embark on the task of surveying all the caves at Qumran in the Judean desert.

This is likely just the first in a series of Dead Sea Scroll discoveries, said Gutfeld; they have hundreds of caves and many years to go."It's a big project. It's a big operation," he said by phone. "We are very optimistic after 60 years we still find new caves with materials that shed new light on the scrolls."

According to a news release from the Hebrew University of Jerusalem, the excavations are part of "Operation Scroll," a joint effort by the university, the Israel Antiquities Authority, the Israel Nature and Parks Authority and the Civil Administration of Judea and Samaria.