New Berlin man will honor his late wife with a wager on her favorite team, the Brewers

NOW: New Berlin man will honor his late wife with a wager on her favorite team, the Brewers

NEW BERLIN, Wis. (CBS 58) -- As Bob Mielke is serving beer at Saturday's Brewers game against the Atlanta Braves, he'll be hoping for a win from the Brew Crew. But he's got a bet on the game that he just can't lose.

The bet is with a Braves fan that he met at the game last May. The losing team's fan will donate $100 to a charity of their choice in Mielke's wife's name.

"You have to deliver that with a card, basically saying, if you're the loser, this money is courtesy of Lynn Mielke. Because without Lynn dying we would've never met," explained Mielke.

Bob Mielke met Jeff for the first time just five months ago at a Brewers versus Atlanta Braves game. It was shortly after Bob's wife, Lynn Mielke, died of ovarian cancer.

"Month of April I was a mess. I couldn't go back to work even though I'd been doing it for 40-something years at the ballpark," said Mielke.

More than 47 years working at the ballpark. It's where he met his late wife in 1980. They both started working at souvenir shops and more recently, serving beer. It's a love they both shared. 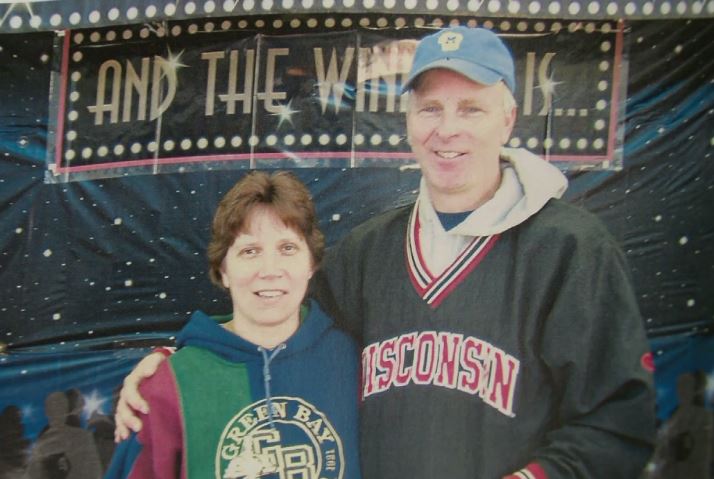 "She was really good at what she did. She liked people, too," said Mielke.

The Mielke's home is still filled with memorabilia that Lynn Mielke collected over the years.

Bob Mielke's favorite memories are the ones driving home with Lynn after a game.

"There was a family that was from Appleton that would come by for probably like 17 years and they'd touch base with Lynn and I both," said Bob Mielke. "She'd say did that family come by and say hi to you? It's pretty cool that families got to know both of us."

When he finally got himself back to work in May, it was almost as if he was meant to meet brothers Jeff and Tony from Atlanta.

"These two guys were walking up to the portable I was working at and they had Atlanta shirts on, and I asked, 'Hey, what are you doing here?'" said Mielke.

Bob showed the brothers a baseball card his daughter had made with Lynn's picture and stats, and he insisted he show the guys around Milwaukee.

Since then, their friendship has grown.

Mielke says he plans to continue working for the Brewers, and his late wife's love for the team is part of what keeps him going.

If the Brewers win, Bob's chosen New Horizon's Unlimited, a charity that helps people with disabilities, for Jeff to donate to.

If the Braves win, Bob will donate to Macon RBI, Jeff's chosen charity.