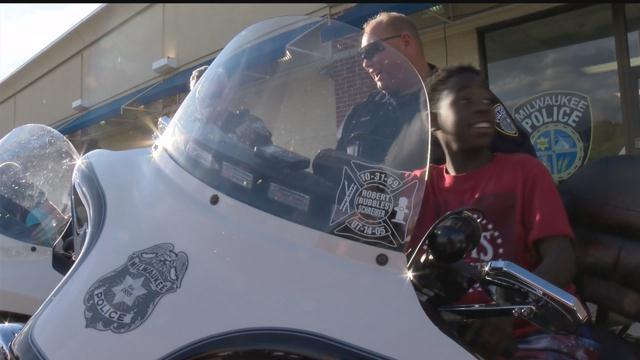 Police relations are often characterized by a lot of distrust and fear, Milwaukee resident “Ms. Donna” explained her hesitation toward police.

\"I feel like they're standoffish and I'm grown, so if I feel that way, how you think a child feels?\" Ms. Donna said.

However, tonight, even if just for a moment, there was a turnaround. The annual National Night Out event brought out Milwaukee's west side in District 3 in big numbers. Police were having fun with kids, and giving away free food and prizes.

\"It make everybody see each other as human beings, and seeing where they can communicate, you can walk up and talk to the police,\" Milwaukee resident Mavis Cosey said.

Community members couldn't help but bring up recent national police brutality cases as part of the disconnect. But, they also wanted officers to know that there was opportunity for mending.

\"It makes me want to cry because this is what we need, we need to talk one on one and not have fear. We need to know that someone is out there to help us, we need them and they need us,\" Cosey said.

\"It's been the turnaround for us with engaging the community, policing in a manner that communities want to be engaged, and making them part of the resolves of the problems we face,\" Smith said.

Milwaukee resident Audrey Burch agrees, \"It's good, the kids to come out, and then they can trust the police officer, and people, we can trust them again, you know what I'm saying? It's not all bad police officers, we got some good ones.\"