Names Released of Two Suspects involved in the Freeway Shooting 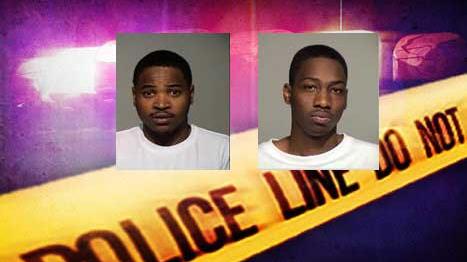 Milwaukee County Sheriff’s Office has released the names of two suspects allegedly involved in the shootings near the freeway on Wednesday.

Justin M. Whitaker, age 25, and Jeffrey R. Reed, age 24, both of Milwaukee were taken into custody.

A gun was recovered from one of the subjects.

Both were booked into the jail with a charge of First Degree Recklessly Endangering Safety While Armed.

The two other subjects in custody are not being identified at this point in the investigation.

Witness accounts and the sheriff’s deputies’ evidence canvass of the freeway provided additional information to Wednesday’s shooting incident which occurred just after 10:00 AM in the Marquette Interchange.

The freeway had been shut down southbound from the Fond du Lac/ McKinley ramps while deputies conducted an evidence canvass on foot.  The closure lasted 2 hours and 10 minutes, and deputies recovered 43 pieces of evidence to include a weapon, bullet casings, fragments and slugs.  The span of the gunfire, based on where the evidence was found, started southbound at State Street and continued on the ramp for the north to the west and also on the ramp southbound through the interchange.

Five vehicles were involved in the incident: three in the shooting, and two caught in the crossfire.

Blue 2010 Chevrolet SUV, abandoned in the Marquette, stolen out of Milwaukee. Deputy search discovered crack cocaine and heroin. Two subjects, after crashing, exited this vehicle and entered a black Infiniti sedan. This was subsequently stopped by MPD at 17th and State Street. Four occupants fled. MPD apprehended two of the subjects. This vehicle exited the freeway going the wrong way up the 11th and Wisconsin southbound I43 on ramp.