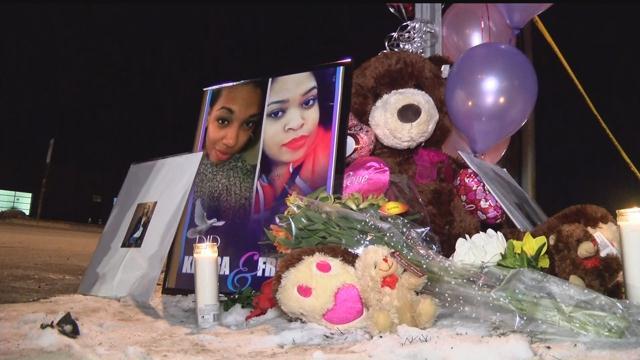 UPDATE: The Milwaukee County Medical Examiner has released the names of the two women who died in the accident Thursday morning.

Fredericka Owens-Wright, 22-years-old, and Kierra Monei Jackson, 20-years-old, died after the car drove off the road, attempted to correct its path and then rolled.

Kierra Jackson, the driver, was ejected from the vehicle.

The decedents' co-workers were in a car behind them and witnessed the accident. The women had left Applebee's. Fredericka Owens-Wright died at Froedtert Hospital.

A vigil was held, Thursday night, to remember the lives of Jackson, Owens-Wright, and to pray for the rapid recovery of the third girl. Jackson's closest friends and family members were in attendance.

"This is unbelievable, but she would want us to remember her as the great person that she was," said LaDaisha Washington, Jackson's cousin.

Close friends say the girl who survived the crash is home recovering from serious injuries.

ORIGINAL: Two women have died and a third person is in critical condition following a one car accident in Brown Deer early Thursday morning.

According to the Brown Deer Police Department, three people were riding in a four-door Chevrolet Cavalier that left the road around 12:30 AM, rolled over and crashed into a line of trees at the southwest corner of W Dean Road and N Teutonia Ave.

According to police, the driver of the car, a 20-year-old Milwaukee woman, was thrown from the vehicle and died at the scene.  A passenger in the vehicle, a 22-year-old Milwaukee woman, was flown by Flight for Life to a Milwaukee Hospital where she later died.  A third person, a 20-year-old  woman from Milwaukee, was transported  by the North Shore Fire Department to a hospital where she is reported to be in critical condition.

The Brown Deer Police Department and Wisconsin State Patrol are continuing to investigate the accident.