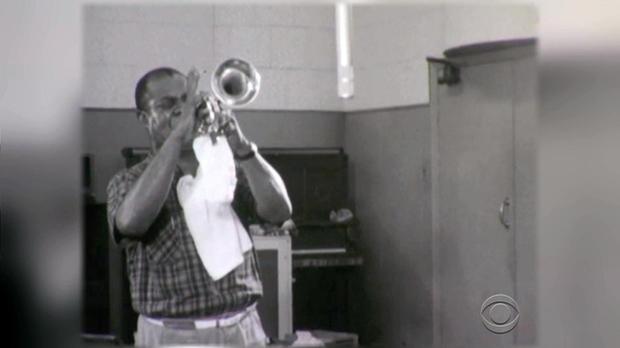 (CBSNEWS) The Louis Armstrong House Museum has acquired the only known film of the great jazz musician in a recording studio, footage that was discovered in a storage facility.

The record producer, Sid Frey, had the film professionally shot but wound up not doing anything with it or telling anyone about it. Michael Cogswell, the New York City museum's executive director, called it "a groundbreaking discovery."

The museum announced the acquisition Wednesday. "The film has spent the past six decades in private hands or in a storage locker. Not even the most diligent Armstrong researchers knew it existed," he said.

Frey's daughter, Andrea Bass, who helped the museum acquire the film, said she first learned about its existence in a chat room discussion of her father's company.

Frey, the founder and president of Audio Fidelity, was known in the industry as "Mr. Stereo" for being the first to release a commercially distributed stereo recording, she said. He died in 1968. Bass said that after their mother died in 2005, her sister placed the Audio Fidelity tapes, films, albums and personal family items in a storage facility -- unbeknownst to her.

"People were always asking me where the masters were," said Bass, a former marketing director. "I went on one of these message boards about Audio Fidelity and someone said 'I have the masters.'"

It turned out to be a person who buys the contents of abandoned storage facilities. Bass said she was unable at that time to purchase the Louis Armstrong material, but the man contacted her again six months ago, and this time they struck a deal.

The film's recording session was made just after Armstrong appeared on Bing Crosby's television special. It shows a relaxed Armstrong in a short-sleeved plaid shirt and shorts blowing his trumpet and singing with his All Stars band. He looks healthy despite a heart attack a few months earlier.

The film opens with two complete takes of "I Ain't Got Nobody." After the first attempt, Armstrong signals for "one more," and then approvingly winks at his bandmates after the second -- master -- take. Much of the film focuses on Armstrong and the All Stars working out a routine for "I Ain't Gonna Give Nobody None of My Jelly Roll." Armstrong didn't have sheet music for the song so he improvised each take with "a new vocal made up of a mixture of dazzling scat singing," the museum said.

The film ends with a complete take of "Jelly Roll Blues," a tribute to jazz composer Jelly Roll Morton.

The museum has also acquired Frey's master reel-to-reel tapes for "Louie and the Dukes of Dixieland," which Armstrong recorded in 1960 for Audio Fidelity at Webster Hall in New York City. The album's numbers include "Limehouse Blues" and "Avalon."

"Capturing Louis in the act of recording is a unique and welcome discovery augmenting what we know about his artistry in an invaluable manner, proving that he was a leader in the true musical sense of that word," said Dan Morgenstern, the former longtime director of the Institute of Jazz Studies at Rutgers University.

For now, the museum will post one complete song on its website and social media. It plans to show the complete film at a future date. The museum is housed in Corona, Queens, in the modest brick building where Armstrong lived for 28 years and died in 1971. It has the largest publicly held archival collection devoted to a jazz musician in the world.