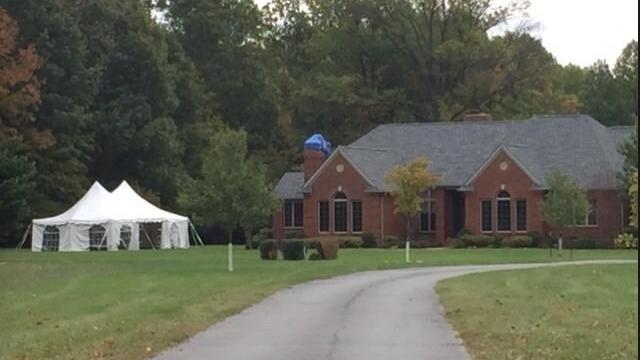 It was supposed to be the couple's happiest day: Kelly Ecker, a nurse, and Dr. George Scott Samson married Saturday afternoon in Terre Haute, Indiana.

By their wedding night, both were dead.

Samson, an anesthesiologist at Union Hospital in Terre Haute, shot his bride and then himself in their home just hours after they exchanged vows, authorities said.

Some wedding guests noticed tension between the couple almost immediately after each said \"I do,\" said Vigo County Sheriff Chief Deputy Clark Cottom.

\"Some guests are telling us the bride and groom didn't speak to each other at the reception,\" he said.

After the reception, the couple hosted members of the bridal party at their home on outside Terre Haute, Cottom said.

Not long after the last guest left, the county dispatch center received a 911 call, according to a transcript and tape provided by authorities.

The caller, said to be Kelly, is only able to give an address, then the call cuts off.

In a second call made a minute later, the caller says, \"he is beating the s*** out of me\" and then says \"he has guns\" and identifies Scott Samson by name.

By the third call, at 1:27 a.m., Cottom said it's clear the situation has escalated because the caller's voice is in more distress. She says \"oh my God!\" and then gunshots are heard.

When deputies arrived on the scene, they were met at the door by an elderly male relative of Samson's, authorities said.

\"He directed the deputies to the bedroom where they found Kelly's body,\" said Cottom.

She had been shot multiple times, he said.

In addition to the male, two other people were found in home: Ecker's 10-year old-son was in the bedroom where his mother's body was found, and he was unharmed, Cottom said.

An elderly female relative was in the home at the time of the shootings, and she also was unharmed, authorities said.

Samson was still inside when deputies arrived, so they made it a priority to get those three people out of the home and to safety immediately, Cottom said.

The elderly male witness told police that Samson had run from the bedroom to another part of the house to get more ammunition, and then ran to the basement, authorities said.

\"The house is near a wooded area and a cornfield, and we didn't want an armed man running deep into the woods,\" Cottom said.

A special response team used a robotic device equipped with a camera to gain entry into the home, he said.

When it located Samson in the basement, it was apparent what had happened.

\"Samson was unresponsive. We saw a bullet wound,\" Cottom said.

Samson's body was found near his gun safe, where he had earlier removed other weapons, said Cottom. Samson was a gun enthusiast who had a federal firearms license, Cottom said.

This week, deputies were still taking inventory of the weapons inside the home. Cottom said several dozen of them had been removed.