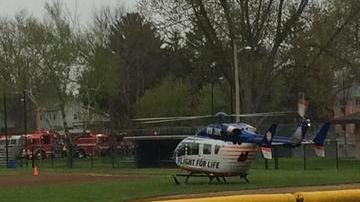 SAUKVILLE -- Flight for Life transported several men who were badly burned at Johnson Brass & Machine Foundry, Inc. in Saukville. Company officials say we there was no explosion, and there is no danger to the community.

The two-alarm fire reported at the foundry was quickly contained.

The victims are being treated at Columbia St. Mary's Hospital on Milwaukee's east side.

Tune into CBS 58 News and monitor CBS 58.com for updates on this story.

Explosion at Johnson Brass. Flight for life on scene. pic.twitter.com/kyN6O6emBQ