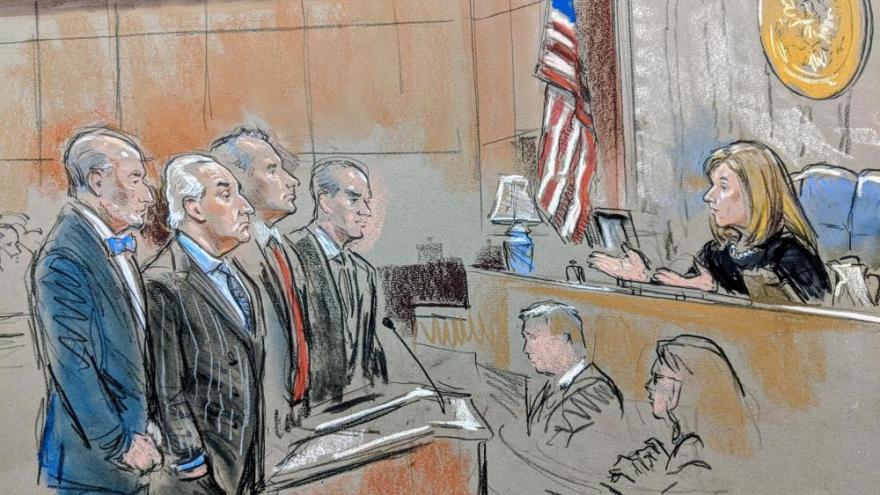 The disclosure came as the Justice Department on Tuesday made public dozens of search warrants from its investigation into Stone, after CNN and other news organizations sued for access to the files.

Stone's assistant, interviewed voluntarily by former special counsel Robert Mueller's investigators, said that, as part of his work for Stone, he bought "a couple hundred fake Facebook accounts" and that bloggers working for Stone sought to build what looked like real Facebook accounts to push information about the 2016 Russian hack of the Democrats, a search warrant unsealed on Tuesday stated.

In 2016, Stone had wanted to push WikiLeaks content online that could help then-candidate Donald Trump, including content from stolen emails from accounts belonging to John Podesta, the then-campaign chairman of Trump's rival Hillary Clinton, the warrant alleged. The warrant that mentioned the fake accounts sought data from Facebook for three accounts, two of which were registered to the handle "rogerstone."

At least one of the suspected Stone accounts was used from October 2016 to March 2017 to buy advertisements to push stories related to Russia and WikiLeaks, according to the warrant. Some social media messages from the accounts rebutted that the Russians were behind the online pseudonym Guccifer 2.0, which the US intelligence community has said was operated by Russian intelligence to disseminate hacked materials aimed at damaging Clinton's campaign.

The ads allegedly purchased shared messages on Facebook such as: "Roger Stone talked about WikiLeaks, Donald Trump, ... " and "Stone Rebuts Charge of Russian Collusion" and "ROGER STONE - NO consensus that Guccifer 2.0 is a ... "

Stone said in a statement Tuesday that the newly released documents showed "baseless over-reach of the Mueller witch hunt" and exonerated him from any accusations of "Russian collusion, Wikileaks collaboration and the receipt and dissemination of stolen e-mails." He has not yet begun serving his sentence of 40 months in prison and has been publicly advocating for a pardon from Trump.

"Although there are private communications contained in the warrants, they prove no crime. I have no trepidation about their release," Stone said Tuesday. "There is, to this day, no evidence that I had or knew about the source or content of the Wikileaks disclosures prior to their public release."

The newly released documents offer a more detailed version than was previously known of how Mueller and other federal investigators aggressively collected evidence about Stone, a close Trump friend and political adviser, by traversing the country for access to his digital data before charging him with obstruction and other crimes.

The warrants, taken on the whole, give a portrait of Stone's extensive digital life.

For instance, Stone, under the threat of prosecution, allegedly moved his home computer data to a private server.

Stone was so afraid of being hacked or being tracked by the government in spring 2018 that he moved data from his home computers to a private server, an assistant voluntarily told prosecutors, according to one warrant application.

"Stone was concerned with his business and work if his computers were seized and he did not have access to them, and he wanted to be able to continue to work, write, and get the word out in that event," the court document said.

His wife had also sent a text in March 2018 that said he was moving to use the server "because of his issues with government agencies." He was arrested in January 2019, and Mueller had clearly been pursuing him for months.

Stone had been paying about $500 a month for a server, according to his assistant.

Stone was convicted of lying to Congress and witness tampering. He was also investigated for hacking, wire fraud, conspiracy and illegal foreign campaign contributions, according to the warrants, but he was never charged with any of those crimes.

According to prosecutors, Stone discussed with his contacts trying to coordinate with WikiLeaks about its releases of hacked emails, and he was in touch with a Twitter persona operated by Russian hackers. Mueller didn't accuse anyone of illegally working with the Kremlin.

The warrants released Tuesday highlighted just how extensively Stone discussed the WikiLeaks drops in 2016. The warrants also noted that, in their searches, "Stone in fact communicated via private direct messaging with WikiLeaks during the Campaign" despite him claiming publicly he had not.

Stone was also in contact with WikiLeaks the following year. One warrant mentioned messages between Stone and WikiLeaks' founder Julian Assange, who since then has been indicted in the US for computer crime and is facing extradition from the United Kingdom.

On June 4, 2017, a month after Mueller's appointment to investigate Russian influence in the election and coordination with the Trump campaign, Stone messaged Assange on Twitter, the warrant said.

"If the US government moves on you I will bring down the entire house of cards. With the trumped- up sexual assault charges dropped I don't know of any crime you need to be pardoned for," Stone wrote.

Six days later, Stone messaged WikiLeaks, writing, "I am doing everything possible to address the issues at the highest level of Government. Fed treatment of you and WikiLeaks is an outrage. Must be circumspect in this forum as experience demonstrates it is monitored."

Much about the Stone investigation is still redacted in the Mueller report. That's because the report was released before Stone went to trial last year, so the Justice Department redacted almost everything about him in the 448-page report.

The documents released Tuesday but still have some redactions of their own, which were made to protect third parties, financial information and details of other pending criminal investigations.

This story has been updated with additional information from the warrants.