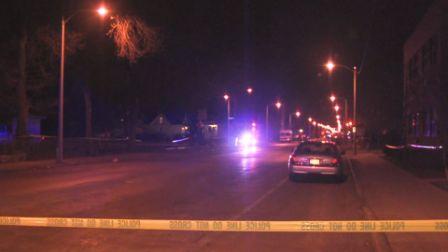 A Milwaukee Police officer shot and wounded a suspect armed with a handgun Thursday morning after witnessing what he believed to be a hand-to-hand drug deal.

At about 2:20 a.m., two officers reportedly saw two men acting suspiciously near the intersection of 16th Street and Center Street on Milwaukee's north side. The officers approached the men in their marked squad car causing one of them to run. The other man reached for a semi-automatic handgun tucked into his waistband, and fired at the officers. One of the officers returned fire, striking the suspect.

Chief Edward Flynn said the suspect shot at the officer from a distance of 10 to 15 feet.

The suspect was still able to run from the officers into a nearby alley where he was captured, but not before struggling with the officers. The two police officers were not hurt and the suspect's wounds do not appear to be life threatening.

Flynn said this is an example of a larger problem his department is facing. \"Last year at this time we had seven homicides. So far this year, we've had 27 homicides,\" Flynn said. \"The violence around here has ramped up, our officers are aware of it and last night was a visual example of what they have to contend with.\"

Flynn wanted to reach out to the community.

\"What I would ask for the public is the willingness to withhold judgment until facts are in,\" he said. \"This is the third police shooting in Milwaukee this month. All three of them were armed suspects risking other people's lives.\"

The second suspect who fled on foot is still at large.

The officer who fired his weapon is a 26-years-old male assigned to District 5 with 4 years of service with the department. He and his partner have been placed on administrative duty in accordance with standard protocol.

Anthony Maurice Edwards lives nearby. He said he saw police blocking the street.

“Basically I heard gunshot, I heard like three different gunshots,” Edwards said. “I heard a bunch of sirens, it sounds so close. I got family around here so I came out to check it out, see what's going on and make sure everything is alright.”

MPD says this is not a case where an outside agency needs to investigate use of force because the suspect is expected to survive.