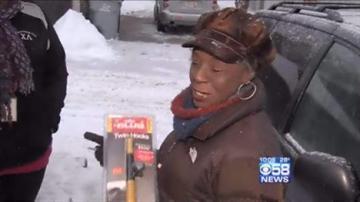 MILWAUKEE-Officers went door to door on the city's north side Tuesday handing out the club, a device you put on your steering wheel to stop car thieves.

Officers got a chance to catch up with residents on what's going on in the community and some agree to place a special reflective sticker in their car.

The sticker issued by MPD says the car owner have given police permission to stop the car in the overnight hours to make sure it hasn't been stolen.

Officers picked certain neighborhoods where car theft numbers are high compared with other parts of the city.

\"We wrote for a grant.,\" explained Officer Lisa Saffold. \"Walmart was able to give us $1,500,  And with that 15 hundred dollars Winter International was able to sell us clubs at 12 dollars a piece and we were able to purchase 108 auto clubs.\"

Owners of the most frequently stolen models were picked first. That includes owners of Dodge Caravans and Chrysler Town and Country automobiles.