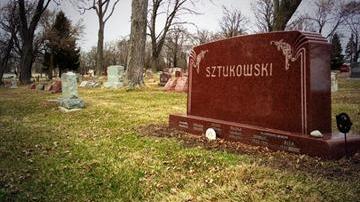 CUDAHY-- When Pam Sztukowski looks at old pictures of her mother, Rita Sztukowski, she remembers the legacy she left behind.

\"She had a wonderful life,\" said Pam, \"she was full of Grace, full of integrity, and that is what is missing now and it's very hard for any of us to come here.\"

When Pam's mother died, her family saved the ashes.  Pam says each of her sisters keep their mother's remains in a locket, a treasured possession that reminds them Mom is always close by.  Although the remains are divided among four sisters, Pam's family still kept her mother's name on the family monument.

\"My mom always said it isn't important to her, to be in the ground next to my dad,\" said Pam, \"she will be next to him in heaven.\"

Pam's family was told they could engrave her mother's resting date on the monument as long as they included the words \"In Cherished Memory,\" but one year later-- the date sits empty.

\"We are just fighting for the dignity for my mom to have a date, she deserves that,\" said Pam, standing next to the monument.

Pam and her sisters say the cemetery director denied their request because their mother is cremated.  Her ashes are not buried there.

Butch Miller, the cemetery director at Holy Sepulcher Cemetery, denied ever speaking with the family, but he told CBS 58 he was ready to make a deal.

\"Listen, this family needs closure, and I totally understand that. I need closure as well,\" he said, as he approached the family.

Miller says closure for Pam's family will come at a price.

Pam and her sisters are working with Miller to negotiate an agreement, but Deb Gunther, who also has family members buried at Holy Sepulcher, thinks the offer is a dud.

\"It sounds like this is being made up on the fly,\" said Gunther, \"and it's unfortunate to put this family through more than they already have to.\"

Gunther faced a similar situation as Pam's family in 2000.

\"A death certificate is sufficient to show that a person died in a certain year,\" she explained, \"so to put them through any more hoops, I really just think it's cruel.\" 15:44

Gunther did not recall paying the $150 administrative fee when she engraved the year of her grandmother's passing on the family monument.  Her grandmother's remains are kept in Arizona.

For Pam's family-- you can not put a price on their mother's life.

Pam and her sisters are trying to get the date of her mother's passing engraved by Mother's Day.