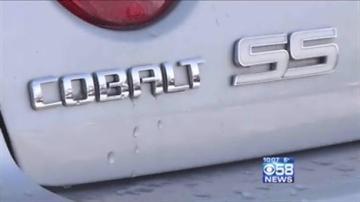 The 15 year old was in a 2005 Chevy Cobalt that was part of a recall announced by GM last month.

On Tuesday that recall expanded.

The Center for Auto Safety says GM was aware of the problem as far back as 2004.

\"This is my child this is my baby girl,\" Beskau told CBS News \"And they knew something was wrong with the car before the accident. I just don't understand how they can knowingly put this cars out and still let people drive them.\"

All the vehicleS can lose engine power when the ignition is bumped or heavy key rings cause it to move to the accessory, or off, position.

That means the car is no longer running and the airbags don't work.

2004: GM BECOMES AWARE OF AT LEAST ONE INCIDENT INVOLVING A CHEVY COBALT. AN INQUIRY IS OPENED, BUT \"AFTER CONSIDERATION OF THE LEAD TIME REQUIRED, COST, AND EFFECTIVENESS OF THE SOLUTIONS…  (IT) IS CLOSED WITH NO ACTION.\"

2005: NEW FIELD REPORTS OF ENGINES LOSING POWER. A SERVICE BULLETIN IS ISSUED TO DEALERS… BUT NO RECALL IS ISSUED.

2007: A GM ENGINEER BEGINS AN INVESTIGATION. NEW INCIDENTS OF AIRBAGS NOT DEPLOYING ARE DISCOVERED.

2010: GM DISCONTINUES PRODUCTION OF THE COBALT - ONE OF THE VEHICLES INVOLVED.

GM issued a response Tuesday which said in part:

\"The process employed to examine this phenomenon was not as robust as it should have been. We are deeply sorry and we are working to address this issue as quickly as we can.\"