Mother of gunshot victim collapses at gathering in daughter's honor 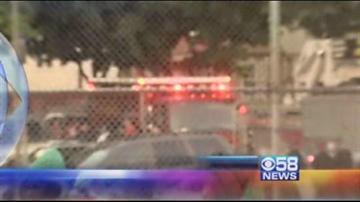 MILWAUKEE-An ambulance was called to the scene of a gathering Friday night in honor of a young girl wounded in the crossfire at a school playground.

The mother of the victim apparently fainted or collapsed during the prayer session organized by local clergy and attended by family and friends.

The mother was checked out by paramedics after having trouble with her breathing.

We were then told that she was alright and would not require transport the hospital.

Out of request of family, CBS 58 News agreed not to videotape the mother of Sierra Guyton who underwent surgery after being struck in the head by stray gunfire Wednesday evening.

Police say they have identified at least one suspect, but have made no arrests.

Witness accounts say two groups of men got into a gun battle. Police say their information is that two men were shooting at each other, in close range of children in the playground at Clarke School near 28th and Clarke.