Snow is now beginning to reach the ground across most of southeast Wisconsin, primarily as moderate snow with some rain mixing in from Milwaukee to Kenosha. The heavy nature of the snow will cause temperatures to drop a few degrees, allowing for a quick 1-2" of accumulation away from the lake over the next few hours before transitioning to sleet and rain overnight. 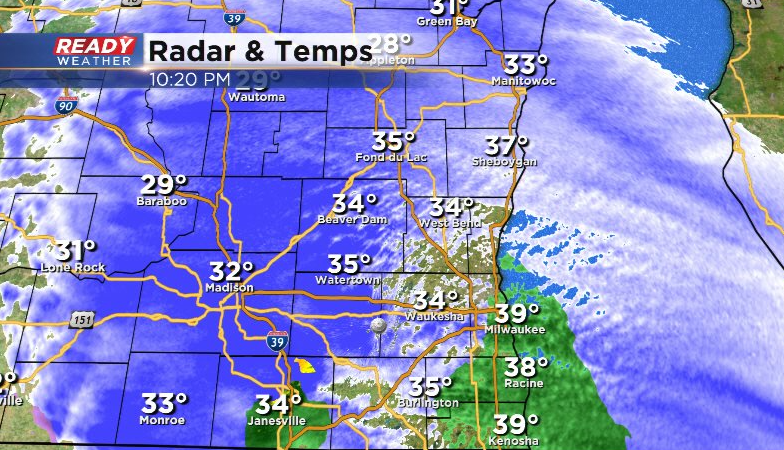 The moderate to heavy snow is reducing visibility to under a mile a times to our west, a preview of what to expect as we head into the early overnight hours. 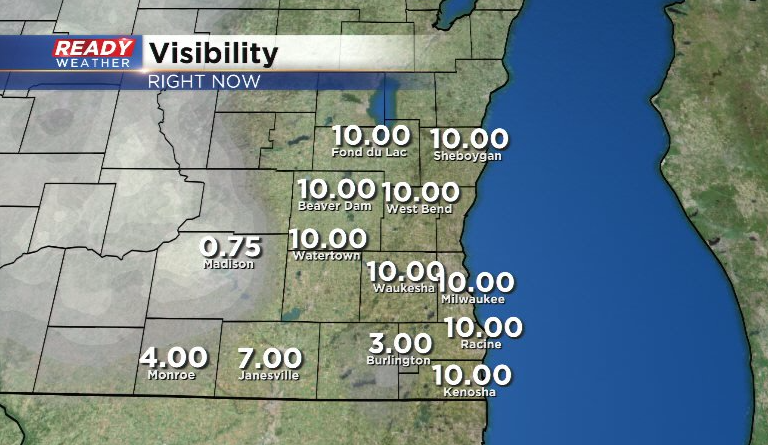 Biggest impacts will be low visibility and slick roads overnight, but as temps rise a few degrees by early morning Monday, a lot of this snow will melt, especially on the roads. 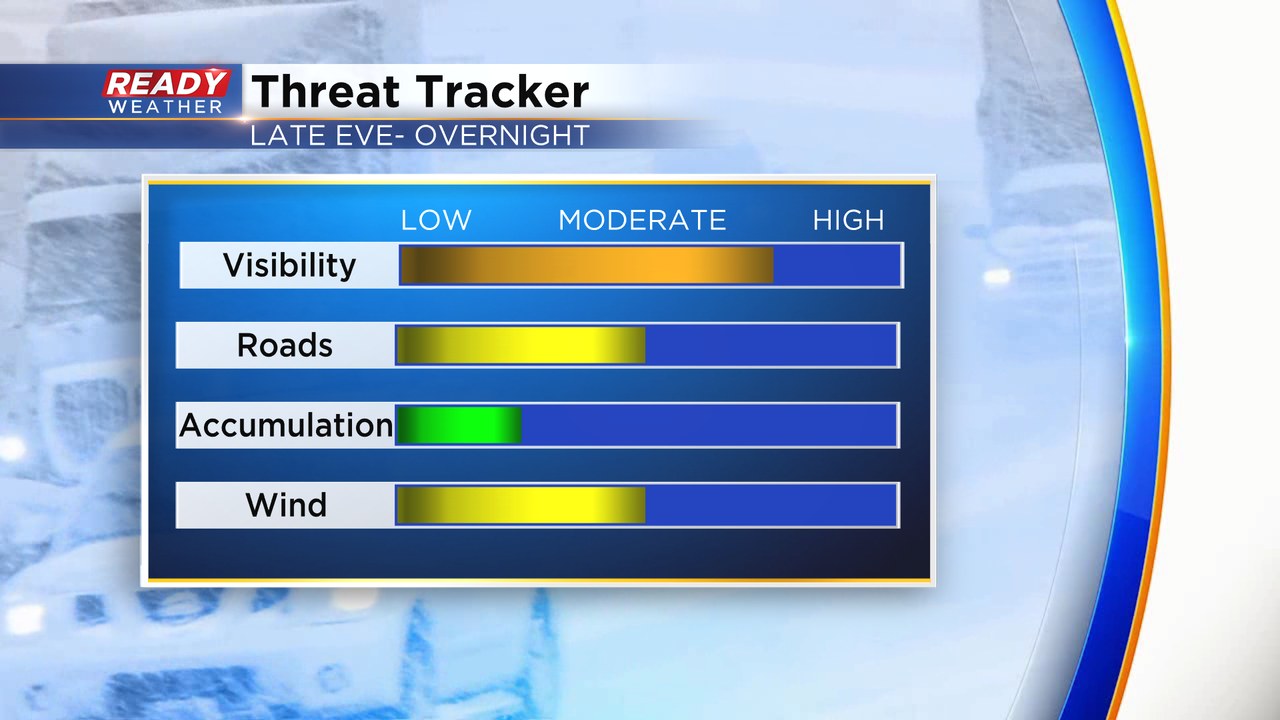 Best chance at lingering slick roads during the morning commute will be in Fond du lac and Sheboygan counties.

Dry air is currently winning the battle with the snow overhead, but by 9p-12a precip moving in from northern Illinois will be falling hard enough to reach the ground. Precipitation should be wet snow as it begins, mixing with some rain or sleet from MKE to Kenosha and along the IL border. 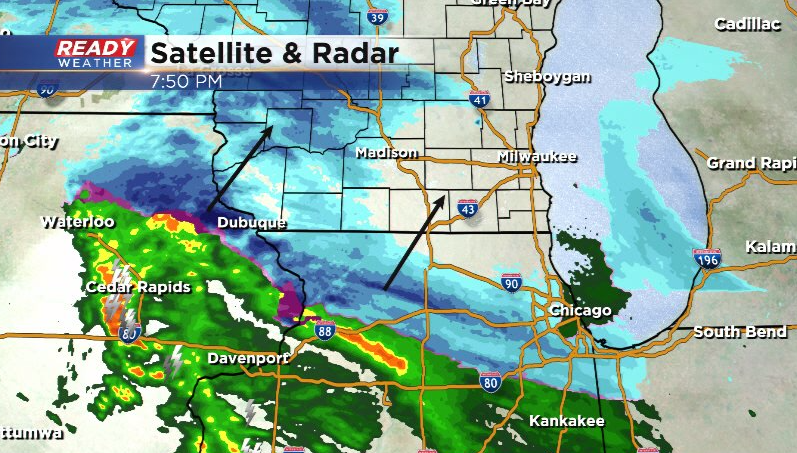 We're also seeing some lightning on the back edge of the precipitation in Iowa. Some lightning and thunder are possible well after midnight, mainly south of I-94. This could enhance periods of sleet overnight. 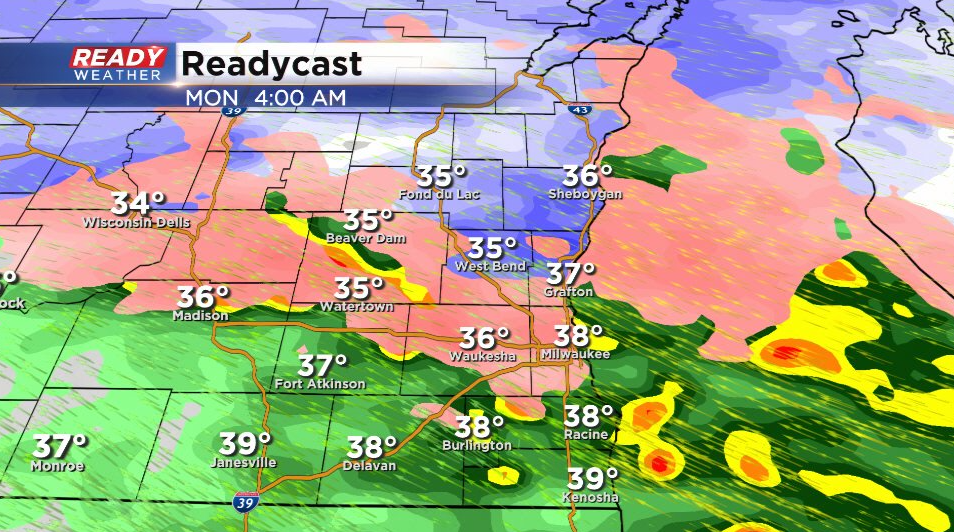 Still expecting a transition to all rain from south to north after 2 am with only light showers and patchy drizzle left by daybreak.

Clouds have thickened up throughout the afternoon with an area of wet snow and rain approaching from the west. 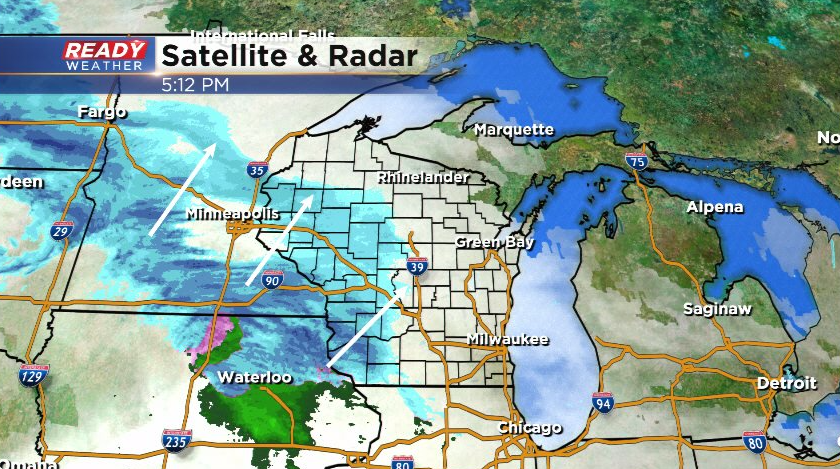 This looks to move into southeast Wisconsin between 9pm and midnight with a burst of wet snow during this time. Some sleet or rain may mix in near the Illinois border and lakeside from Milwaukee southward. 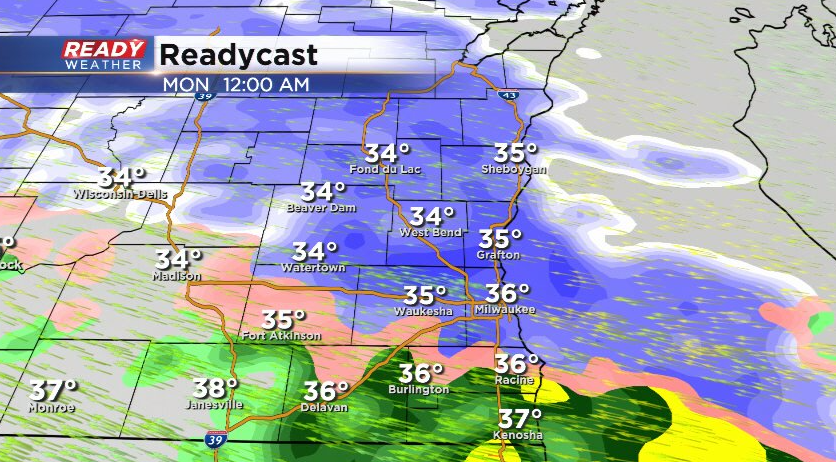 Any snow and mix will transition to rain and drizzle from south to north between 2am-5am. There may be a brief period of freezing rain or drizzle north of Milwaukee before temps warm into the mid 30s. Drizzle and light rain showers end by late morning Monday. 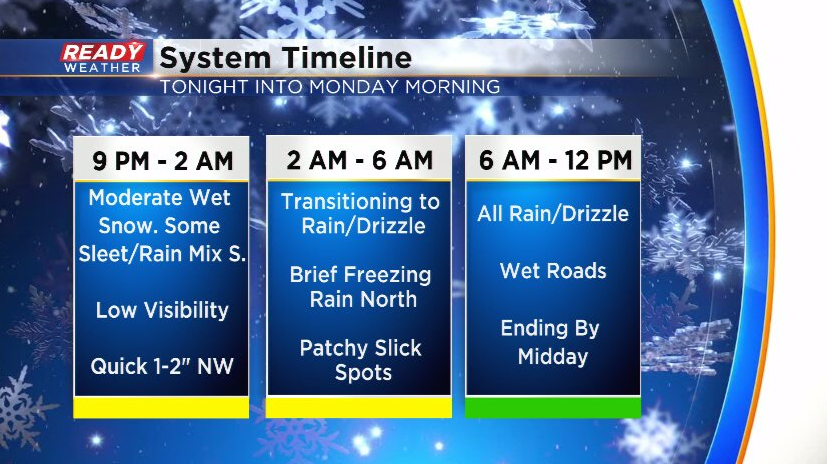 A quick 1-2" of wet snow is expected inland and north of the metro before changing over to rain. Far south and lakeside areas could see a quick coating on the grass before it melts as temps warm overnight. 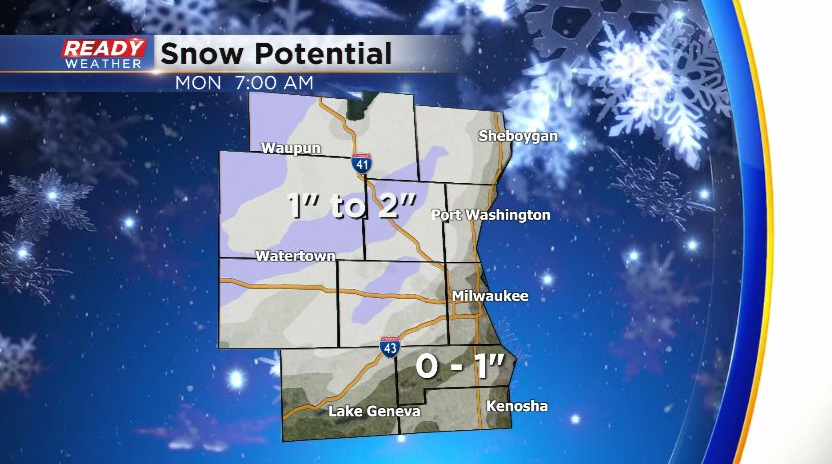 Still on track for a couple of different storm systems to impact us in the next few days.  Look for snow to overspread the area later this evening into the overnight.  We'll see a changeover to rain by pre-dawn hours.  During the transition, there could be some freezing rain, mainly north of I-94.  It's this region we could see a few inches of slushy snow as well.  Expect less the farther south you go.  This is why we have a Winter Weather Advisory in place until mid morning Monday.  It starts mid evening Sunday.  Then behind this system another one to impact us Tuesday afternoon and evening.  This could give us a few more inches of snow.  We also have our eyes on Saturday with yet another system to impact us.  It also turns much colder into the first week of January. Stay tuned! 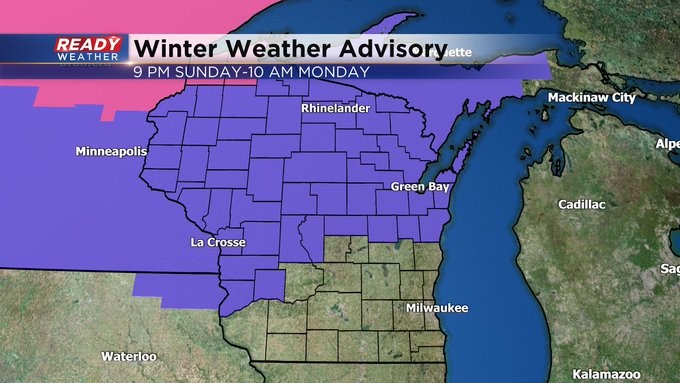 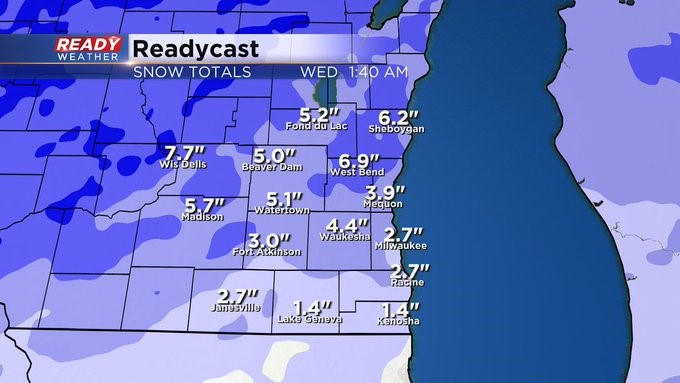 MILWAUKEE (CBS 58)--So many of us wanted snow for Christmas.  Didn't happen.  But what about the day after?  Or should I say the night after?  Look for snow to break out by mid evening across the area from the southwest to northeast. Then expect a changeover by dawn.  But not before a slushy inch or two could collect, especially north of I-94. 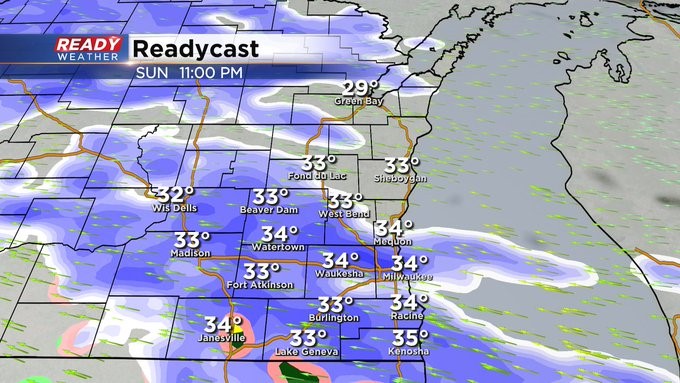 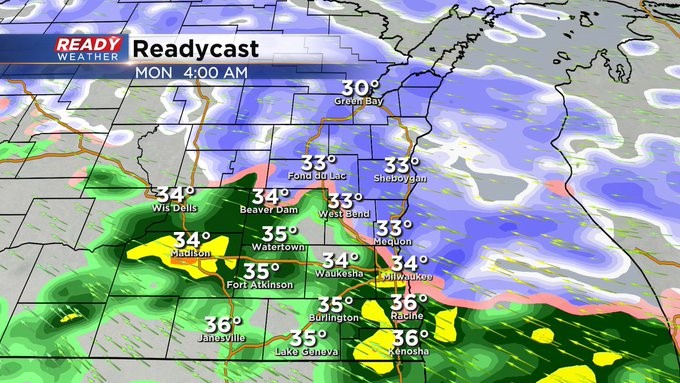 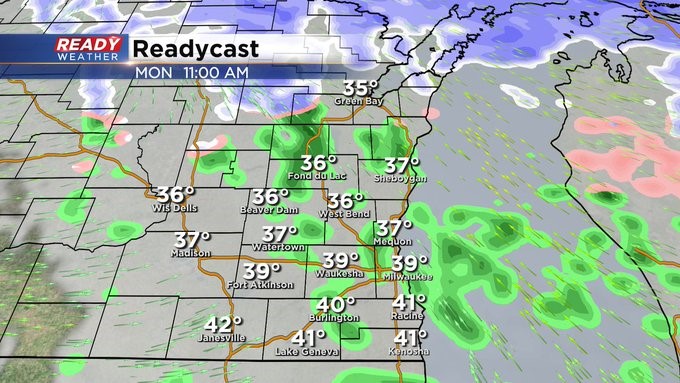 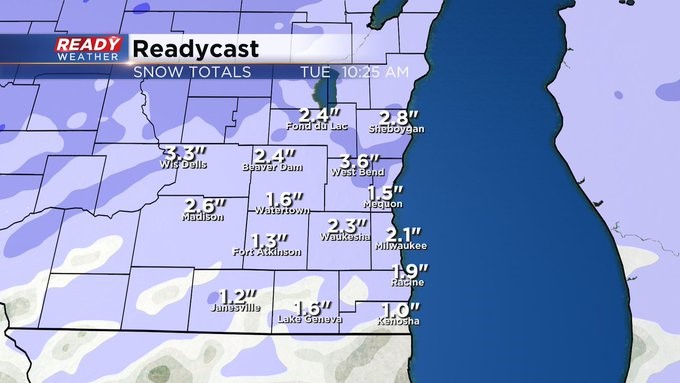 And on the heels of this system, another quick mover Tuesday afternoon and evening.  It could be almost the same kind of set up.  Then we sit and wait for a more impressive cold front to come out way by the start of the new year. And to kick off January, we could be seeing highs only in the teens and 20s.  Winter is on its way back.