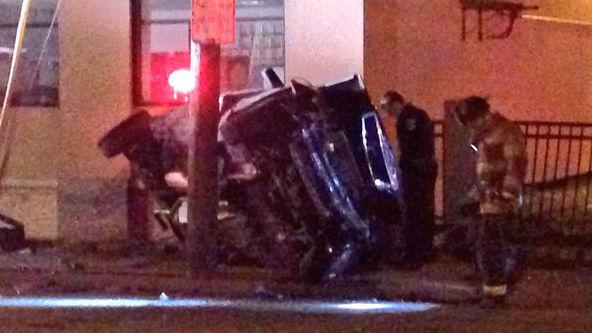 A 7-month-old male infant was killed in a crash caused by his intoxicated mother on Milwaukee's northwest side early Wednesday morning.

Witnesses told police that a 1998 Mercedes-Benz was traveling eastbound on W. Appleton Ave at a high rate of speed when the driver lost control of the car. The car struck a fence, a pole, and a building, turning it on its side. Crews were called to the accident at Appleton and Burleigh St. just after 1:30 a.m.

The driver, 22 year-old Regina Mitchell of Milwaukee, and her infant son O'Ryan had to be extricated from the rollover crash, as the vehicle was trapped between an electrical pole and a building.  There was no other vehicle involved in the crash.

The infant was pronounced dead while being taken to Children's Hospital.

Investigators determined the boy was in an infant carrier that was not secured to the vehicle. The mother, who was intoxicated at the time of the crash, was taken to a local hospital to be treated for serious, non-life threatening injuries. She is in police custody for Homicide by Intoxicated Use of a Motor Vehicle as well as Operating After Suspension, Causing Death.

\"I can see it's very tragic,\" Lena Zingale said after walking by the crash scene.  \"I'm so sad for that baby.\"

CBS 58 spoke with Mitchell's grandmother, Flossie Mitchell-brown, who said that her granddaughter made a bad decision, one that was out of character for her.

Mitchell-Brown said Regina was typically a loving mother, but added that she did have stresses in her life. She said her granddaughter is not an alcoholic and that she doesn't know what made her allegedly drink and drive.

The area around the crash was closed for several hours while police investigators worked on recreation.

People who work in the area are stunned and saddened by what happened.

Workers in the building where the woman's car crashed into say people drive too fast along Appleton Avenue all the time.

\"When you're out here doing anything, sweeping up, picking up garbage, it's actually scary,\" TJ Norman said.  \"You can feel the wind as they go by, so you know they're going too fast.\"

Norman says this is the second time in two years someone has crashed through the same fence.

Milwaukee Police tell us this case will be turned over to the Milwaukee County District Attorney in the coming days.

\"Different generation,\" Tony Zingale said before heading back home with his wife.  \"They're not from our generation, that's for sure.  Parents, grandparents, they're all affected by this.\"

The Mitchell family is hoping to have a vigil on Thursday between 5 p.m. and 6 p.m.