Mother: Doctors Failed To Figure Out Coin Was Lodged In Boy’s Throat For More Than A Month 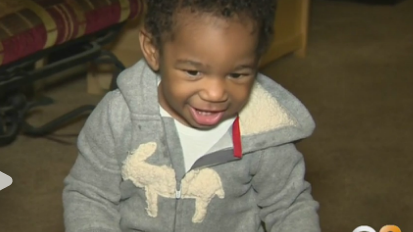 LONG BEACH (CBSLA.com) —Most people don’t think much about pennies these days, but for one mother, a single penny was the difference between life and death for her young son. Thanks to her persistence and her refusal to listen to some doctors, her son is back to being a happy little toddler

Samantha Knox told CBS2 a penny was stuck in her son’s throat for 37 days before doctors could figure out what was wrong with him.

She said in June, E.J. became listless and withdrawn, developed a fever of 103 and had a rash on his belly.

According to Knox, she took her son to a handful of pediatricians and urgent care visits, and they told her the boy had a viral infection, something she said did not add up.

“It was heart-wrenching to watch my son completely suffer,” Knox recalled.

After more than a month, she took the toddler to Miller Children’s Hospital Long Beach, where doctors finally found out what was making the boy sick.

“When they gave me the news, I immediately started crying.” Knox said.

Doctors had to operate on the 8-month-old to get the penny out, which Knox said should have happened sooner if E.J.’s previous doctors had taken an X-ray of him.

“This very small object could’ve potentially been the worst outcome for my son,” Knox said.

She said she doesn’t know how the penny got into her son’s throat.