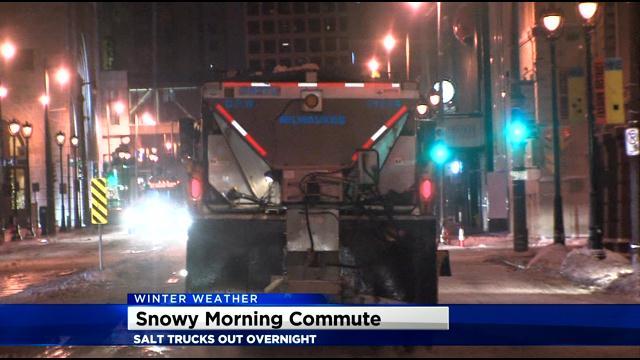 Winter isn't over yet! Just as the First Alert Forecast team predicted, the snow started falling in southeastern Wisconsin around 4:30 a.m. Tuesday.

The snow continued to come down throughout the morning commute making the drive into work much longer for many people. In fact, some drivers say their commute time more than doubled.

“I work third shift. I was heading home on 45 South. What's normally about a 20 minute ride, took me almost 45 minutes,” Cheryl Davis wrote on the CBS 58 Facebook page.

Milwaukee's Department of Public Works had salt trucks out on the streets well before the snow started falling. Crews started putting salt on the roads at 11 p.m. Monday.

DPW crews are responsible for 7,000 miles of road in Milwaukee. It takes eight hours to pre-treat all city streets. Once the snow stops falling, it takes 18 to 24 hours for workers to plow all of them.