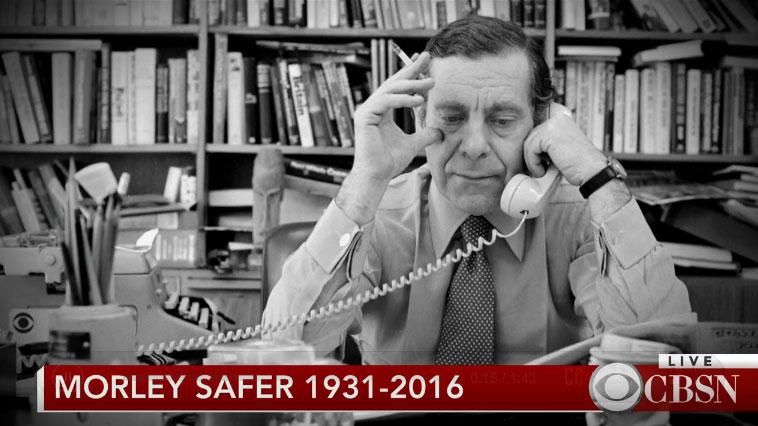 (CNN) CBS News Reporter Morley Safer died on Thursday at the age of 84.

Morley just retired after working 52 years at CBS including 46 seasons with 60 minutes.

We are sad to report that legendary @60Minutes correspondent Morley Safer has died at 84: https://t.co/n2MbgKIKgf https://t.co/0jnW83YnwS

Safer was the longest-serving correspondent in "60 Minutes" history. He joined the CBS program in 1970, just two years after it launched, and worked there ever since, contributing 919 reports over the years. He filed his last report in March.

CBS announced Safer's retirement last week and televised a special hour-long retrospective about his career on Sunday. The timing of the announcement was partly due to Safer's poor health.

Jeff Fager, the executive producer of "60 Minutes," visited Safer after the retirement announcement and said Safer, a "humble man who never expects attention," soaked up all the recognition of his achievements.

Safer, a native of Canada, wrote for Canadian newspapers in the 1950s before joining the CBC as a television correspondent. From there, he moved to CBS, first as a London-based correspondent, quickly relocating to Saigon to cover the Vietnam War.

"He was an extraordinary writer and reporter, and a true gentleman,said CNN anchor and "60 Minutes" contributor Anderson Cooper. "From his work during the War in Vietnam to his completely unique and evocative pieces for 60 Minutes, he set the standard for what we all want to be as journalists. His kind shall not pass this way again."

His work as a war correspondent was legendary.

As recounted in the "Encyclopedia of Television News," Safer's "1965 film report showing a marine at Cam Ne setting a hut on fire with a cigarette lighter almost single handedly ushered in the era known as 'the living room war.' President Lyndon Johnson was irate over the negative publicity Safer created concerning the Vietnam War and unsuccessfully pressured CBS to censor him."

Safer wrote a book, "Flashbacks: On Returning to Vietnam," in 1990.

After his tours of journalistic duty in Vietnam, China and elsewhere, he returned to London in 1968, this time as bureau chief for CBS. Then he joined "60 Minutes" two years later.

Safer's insatiable curiosity was a perfect fit for the newsmagazine. He investigated wrongdoing, profiled tycoons and celebrities, and told offbeat tales that were rarely seen elsewhere on TV.

"They were works of art almost," Fager said in Sunday's hour-long tribune. "What makes a story a Morley story is his original voice. And by that I mean not just the timbre, but [also] the quality of the storytelling, his writing."

In a statement last week, when his retirement was announced, Safer said, "It's been a wonderful run, but the time has come to say goodbye to all of my friends at CBS and the dozens of people who kept me on the air."