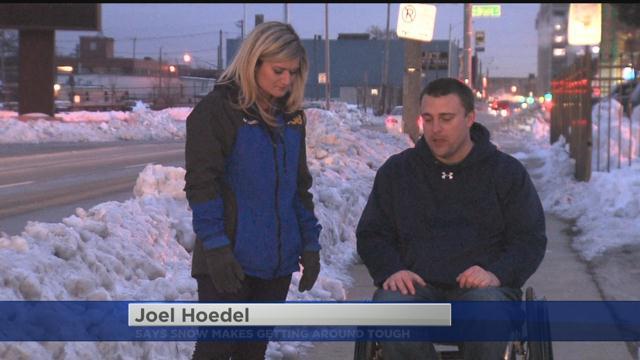 Every time it snows their daily routine has to change. People with disabilities say that's because even though sidewalks are plowed, the corner cross walks are not.

"I know when it first snowfalls, I'll avoid going out that day unless I really need something. I'll not go out," said Joel Hoedel.

Hoedel depends on a wheelchair to get around and says he has to change his entire routine when it snows.

"This would be a challenge for me to get over. Probably if I got on top all that would happen is that my wheels would spin and I'd have a hard time getting over it," said Hoedel.

But the biggest challenge is the sidewalk space near intersections. By ordinance in most cities, including Milwaukee and Tosa, property owners are required to clean it within 24 hours of snowfall.

"The sidewalks in front of the property and the ramps that would lead up to the street for the property or homeowner on the corner; its their
responsibility to maintain that clear passageway onto the street," said Hoedel.

But they often don't.

"My only option would be to turn around and go back and maybe wheel in the line of traffic to get around this. I wouldn't be able to get over it," said Hoedel.

Brian Peters works with Independence First helping transport people with disabilities and says its a problem every year;one that the  city adds to with plowing.

"Often property owners will shovel up to that curb cut. Like the end of their property and say "That's my property line, I'm not going above that so the snow tends to mound at the curb cut," said Peters.

Wauwatosa police Lieutenant Brian Zalewski admits the mounds of snow at intersections and around bus stops is a city problem but says it's being worked on.

He says its just taking longer than usual because of the amount of snow, ongoing clean-up and cold weather turning it into ice.
Zalewski says at the end of the day the kind thing to do is shovel as soon as you can.