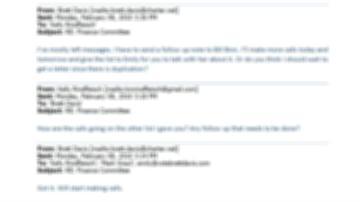 MILWAUKEE- There was more insight Thursday evening from the tens of thousands of e-mails released Wednesday that were part of the John Doe investigation into former Scott Walker staffers.

Political workings among Republicans during the 2010 run for governor is just one more topic to pop up.

In an e-mail it appears then-Wisconsin GOP chairman Rience Priebus was playing favorites behind the scenes with then-County Executive Scott Walker over fellow Republican candidate Mark Neumann by letting Walker in on Neumann's strategy against him.

Neumann told CBS 58 that the investigation into the e-mails is over and that it was concluded that Scott Walker did nothing wrong, therefore why should we question one of 27,000 pages of e-mails and ask about how it affects us.

Still, could these e-mails affect Walker as he is now up for re-election in 2014?

Despite what some Democrats may say, he believes that this will likely not change many voter's minds.

He also said, because of Walker's personality, this will not stick to him like \"Bridgegate\" stuck to New Jersey Governor Chris Christie.

“This is nothing more than Democrats using a closed investigation to launch a witch hunt against a Republican governor who is doing great things for the people of Wisconsin. This case has been closed and the people of Wisconsin know Scott Walker for the reform governor he is. The Democrats should spend less time holding press calls trying to create news and more on creating jobs and fixing ObamaCare.”