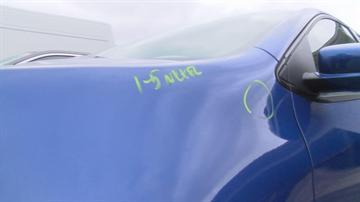 \"Completely helpless,\" Kunes said.  \"It's amazing what Mother Nature can do.\"

\"All of the sudden it just opened up and it was like ping pong balls and golf balls just dumping out on the cars,\" Kunes said.

Hail about an inch-and-a-half wide damaged nearly every one of the 400 cars in his lot.  Luckily, no windows broke, but some vehicles had more than 70 dents.

\"They are all insured,: Kunes said.  \"We're waiting on our insurance company, of course, I know they're busy as a lot of this area got hit all the way up to Burlington.\"

\"We've seen hail, but nothing like this,\" Tom Keyzer said.  \"Especially not in this area.\"

Keyzer owns Keyzers Auto Body in Elkhorn.  He's getting his shop ready for an onslaught of damaged cars.

Keyzer might set up a drive-thru service to get customers in quicker.  He can fix most dings in several hours, but if he needs to order parts, some may be off the road for up to a week.

\"I don't think people are going to get too frustrated, unless it's their pride and joy, as long as we fix them and they look good, they'll be happy,\" Keyzer said.

For Scott Kunes, staying patient is all he can do.

\"I shouldn't say we're excited about it, but we're just anxious to see what our next step is,\" Kunes said.

It's not all doom and gloom at Kunes Country.  Kunes tells CBS-58 they plan to have a \"hail sale\" where customers can get big discounts on the damaged vehicles.