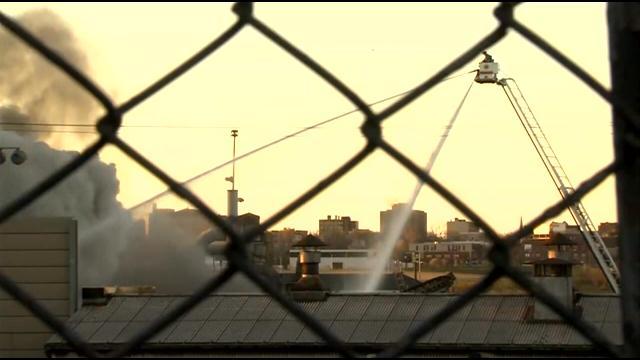 The Milwaukee Fire Department and OSHA are investigating Monday's fire at Miller Compressing on the city's south side.

A 70 foot tall pile of car debris caught fire inside a metal building early in the day and burned for several hours before being declared under control around 5 p.m.

All of the employees at the company were accounted for, and no reports of any injuries.

The metal recycling facility has been the scene of fires before, the nature of the business, said one fire official on scene.

\"Anytime you take a bunch of or those types of materials soaked in gasoline or oils or anything of that nature, you always run the risk of having something ignite,\" explained Assistant Chief Dan Lipski of the Milwaukee Fire Department. \"And then you couple that with cutting tools, the potential does always exist.\"

Just four months ago, smoke billowed from a pile of cars at Miller Compressing.

Two years earlier, a fire in April sent more smoke through the south side.

No one was directly injured here, but people living close to the company reported eye and throat irritation.

In 2011, Miller Compressing Company paid a $3500 fine, cited for one violation of failing to protect employees working around machinery that could seriously hurt them.

Then one year later, the company received six more offenses and a fine to the federal government of $40,000.

No word on the exact cause of Monday's fire.

CBS 58 called Miller Compressing Company late Monday evening for a comment, but did not heard back.