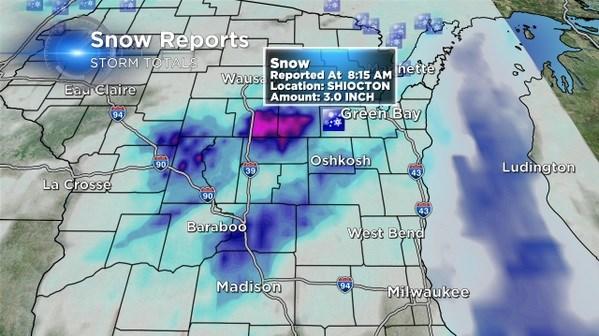 Note the lack of reports from around Milwaukee.  That is because of primarily rain along Lake Michigan and slushy accumulations inland of less than one inch.  Accumulations do pick up in the Fox River Valley.  Shiocton received 3\" of snow and most locations around Green Bay were in the 2 to 4 inch range of wet snow.

This afternoon we continue to experience widespread mist and drizzle that is forecast to change to flurries.  Flurries around Milwaukee transition to snow showers in Green Bay.  Don't be surprised to see snow, especially early in the game.  Accumulations in Green Bay should be light.  Here is the forecast for the game:

Rebecca, Lance Michael and I are still tracking milder air for later this week and the weekend.  Be sure to look at the First Alert 7 Day Forecast.