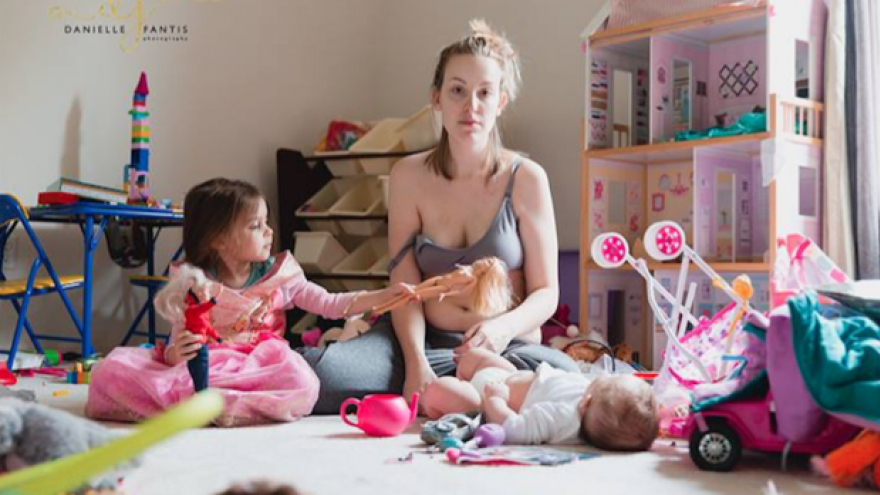 (CBS NEWS) While scrolling through her Facebook feed one morning, Kathy DiVincenzo spotted photo after photo of new moms and their seemingly picture-perfect lives.

DiVincenzo felt like her reality was much different than other parents. In fact, she knew it was — the mother of two, 3-year-old Gianna and 3-month-old Dominic, suffers from postpartum depression, anxiety and obsessive compulsive disorder.

"All moms, especially new moms, seem to have it together," DiVincenzo told CBS News. "I just wish somebody would post real life so I can relate — why can't I relate?"

While venting to her friend, photographer Danielle Fantis, the Cleveland, Ohio woman decided to "get real."

The pair worked together to stage a photoshoot to show women what living with postpartum depression looks like. DiVincenzo posted the side-by-side photos on her Facebook page, and they've since gone viral with nearly 70,000 shares.

In one photo, her house is spotless, she's nicely dressed and smiling as if she doesn't have a care in the world. In another, there are toys sprawled out across the room, her hair and clothes are disheveled and she gives a blank stare as her daughter plays beside her.

"The truth is, both of these pictures represent my life depending on the day," DiVincenzo wrote. "I would only ever comfortably share one of these realities though and that's the problem. The only thing more exhausting than having these conditions is pretending daily that I don't."

Shortly after the birth of her daughter, DiVincenzo left her corporate job to become a doula. She assists women during childbirth and teaches childbirth education.

It wasn't until several years later, while speaking with women about postpartum depression, that DiVincenzo realized she had it.

So when she had her second child, DiVincenzo knew the signs and was diagnosed early. She now sees a therapist, takes medication and asks her husband, Paul, for help whenever she feels overwhelmed.

"It was definitely fate. I caught it immediately," she said. "I know what I'm feeling. Sadly, most people don't even know to that. You don't get it until you're in it."

But DiVincenzo hopes women will have a better understanding of postpartum depression after hearing her story.

"It's different for every woman," DiVincenzo said. "It's not just about having a messy room or a top knot and a disheveled look."

One minute, DiVincenzo said she feels awesome and put together. The next, she's overwhelmed with worry and doesn't feel like leaving her bed.

Whenever people ask her to describe what it feels like, she answers: "It feels like I'm breathing water."

Recent research from the U.S. Centers for Disease Control and Prevention shows about 1 in 9 women experience postpartum depression. DiVincenzo believes that number could be even higher, as many women often go undiagnosed.

"If anything's feeling 'off' past those first two weeks of the normal 'baby blues,' reach out for help," DiVincenzo advises. "You don't have to just 'suck it up.'"