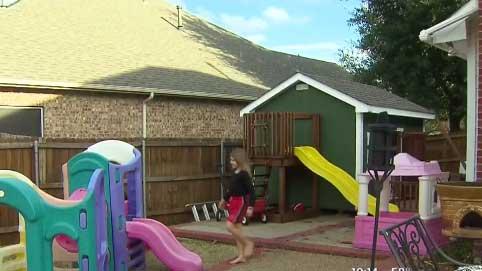 PLANO (CBSDFW.COM) The sound of children playing has become the subject of a lawsuit between two Plano homeowners.

Kelly Counts placed a playhouse outside her backdoor for her four children enjoy.

“One of the big reasons we chose the house was because we would be able to move this playhouse,” says Counts.

But the mother says that laughter coming from her kids in their playhouse has been drowned out by music with raunchy lyrics coming from next door.

“It’s unfathomable to me. I can’t imagine the sound of kids playing at any age or stage of my life and thinking that I needed to sue someone over it,” says Counts.

But Counts is being sued for a playhouse that her neighbors say is upsetting their “tranquil quality of life” and quote “creating noise issues as well as visibility issues for them and their pets,” according to minutes from an HOA meeting

Those neighbors are Irving and Anita Ward.

Irving Ward declined to comment on his lawsuit or the Counts lawsuit against him over the explicit music they claim is retaliation.

“I have nothing to say. I have to call my attorney,” he told CBS11.

But the Wards argue that because the 10, 7, 4 and 2 year old children are homeschooled, the noise never stops.

“The Wards have never once asked me to tone down the noise of the kids playing,” says Counts.

Kelly Counts says she’s tried to work with her neighbors but they refuse.

Since the City of Plano and her HOA have approved the playhouse, the Counts don’t plan to move it.

But they also don’t want their children to hearing explicit music when they go outside.

“I don’t feel comfortable in my own backyard,” says Counts.

This appears to be headed to court with both sides seeking damages.