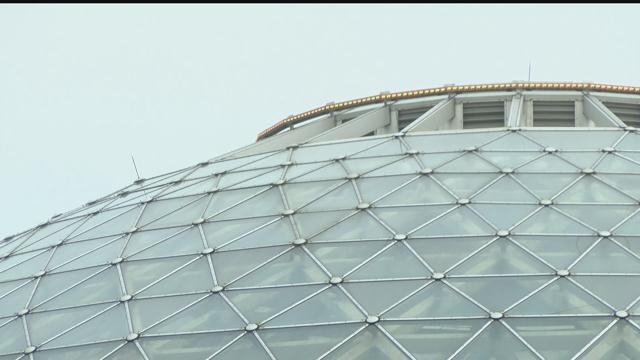 The Mitchell Parks Domes are now on an "endangered list".

It's put out every year by the National Trust for Historic Preservation and focuses on historic places in the United States that are most at risk of being torn down.

The group says they are concerned about the growing willingness to abandon long-term upkeep at the domes. By putting the Domes on this list they are trying to highlight the severity of the situation.

During a press conference on Wednesday at the foot of the Domes, the President of the Milwaukee Preservation Alliance read a letter from Donald Griebe Jr.

"As a child I recall my dad building models of the domes out of balsa wood," Dawn McCarthy, president of the Milwaukee Preservation Alliance, said.

That was in the 1950s. Now, some-fifty later, netting to catch falling concrete has been added to his design.

There's questions on how to fix it. That's why this year the domes join the Delta Queen in Louisiana and the San Francisco Embarcadero on the list of 11 Most Endangered Historic Places.

"Since 1988, the America's most endangered list has been one of the most effective tools to draw attention to sites by shining a national spotlight on important examples of the nations architectural and cultural heritage," Genell Scheurell, senior field officer for the National Trust for Historic Preservation, said.

"County Executive Chris Abele is the person who started talking about tearing down the Domes. He's the only one who's promoted that idea," Haas said during the press conference.

A spokesman for Chris Abele said that the county executive has never advocated for tearing down the domes.

In a statement, a spokesperson for Abele said: "The county executive understands that the Domes and what they represent are important to our community. He is committed not to a specific outcome, but to engaging the community in a thoughtful and deliberate planning process that results in a sustainable future for Mitchell Park."

Short-term solutions like the netting could last as long as five years but it does not address larger concerns about the building's complex structure, Haas said.

"The domes are marvels of modern engineering - the first conoidal domes in the world - or cone shaped domes," Scheurell said.

A Domes Task Force will meet in the next month to give a clearer picture about the situation, Haas said.

The Domes designer's son had this to say.

"At the ripe old age of 98, dad is still proud that the Mitchell Park Domes have become a powerful visual icon and a familiar Milwaukee landmark," McCarthy read.

Learn more about the addition to the list by clicking here.