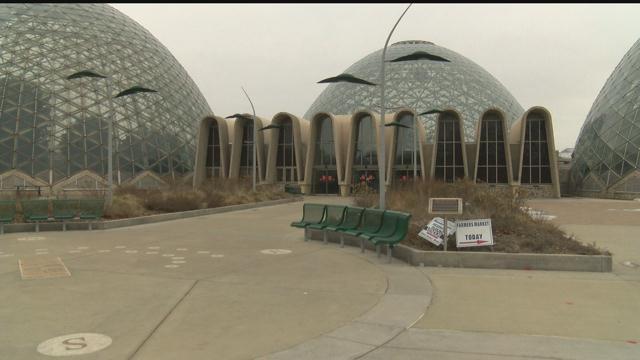 The Mitchell Park Desert dome has been closed since last week after chunks of concrete fell from the structure.

And Friday County Executive Chris Abele announced all three domes would be closed  for the weekend due to safety concerns. But Monday we found out its going to be a lot longer before they reopen.

Abele says the domes are 50 years old, so repairs were bound to happen at some point. He says, while the county works on a short term solution, the Domes will remain closed, for at least the next few weeks.

Those who wanted to enter the domes Monday were instead greeted with a big red sign: Closed until further notice.

"You've got extreme cold on the outside, arid dome on the inside and you've got 50 years of seasons to push through. Even the leading technology 50 years ago would have had a time limit on it," said County Executive Chris Abele.

It's not the first time either. The tropical dome closed in 2014 for similar reasons, exactly why Parks Director John Dargle says they've got some contingency plans in place.

Options include putting netting inside the domes, something Senator Chris Larson is against.

"I don't think that's going to make folks feel safer. I think we need to be more transparent about what the structural integrity of our domes really is," Larson said.

Another idea: wrapping the steel joints of the building in plastic; but it will be costly.

And it will take an estimated 65 to 75 million dollars to fix everything long term in all three domes, with the county executive saying its time for the community decide what to do going forward.

"That's a lot of money for the county, its not my money its yours. I think its important going forward...to ask ourselves as a community...is this what we want to do ? Replicate the domes again?" said Abele.

All events for at least the next three months have been notified: Find a new venue, just in case.
The Parks Department says they're refunding any fees and working to find new locations for these events within the parks system.