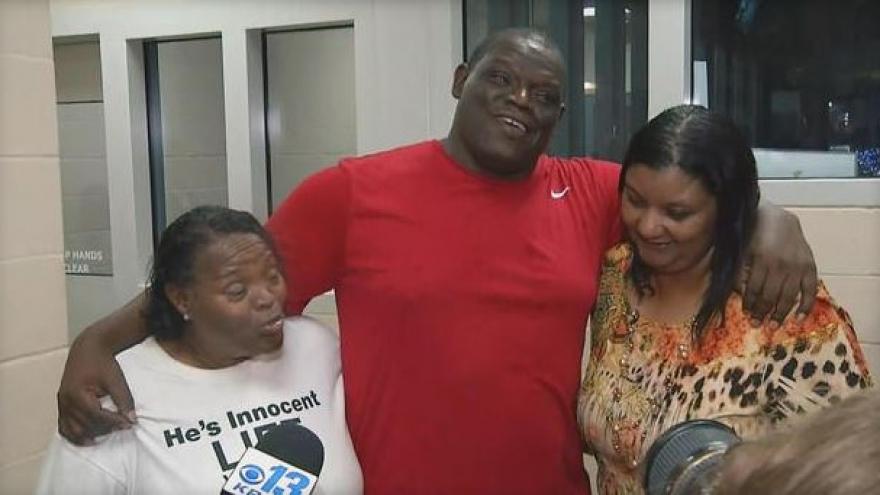 CAPE GIRARDEAU, Mo. (CBSNews) -- A Missouri man walked free from prison on Monday after serving nearly 18 years behind bars for a murder he didn't commit. David Robinson of Sikeston was released Monday night from the Jefferson City Correctional Center, hours after Missouri Attorney General Josh Hawley recommended that charges against him be dismissed.

Robinson had been behind bars since being convicted in 2001 of killing Sheila Box, who was shot to death after leaving a Sikeston bar she co-owned with $300 in cash and checks. He was sentenced to life in prison without parole.

"Been a living nightmare. It's been an up-and-down rollercoaster," Robinson told "48 Hours" correspondent Erin Moriarty in a recent interview in prison.

Police believed Robinson, who had a history of drug crimes, shot Box during a drug deal.

"That bothered me more than anything, to be wrongfully accused of killing a woman," Robinson said.

But there was little to tie Robinson to the murder: No physical evidence, just one eyewitness, Albert Baker, a paid police informant who claimed he saw Robinson shoot Box at a busy intersection.

Filmmaker Steve Turner, who is working on a documentary about the case, said, "There were no three or four eyewitnesses who saw him shoot her; there was just one guy who had a crazy story, and bam, he's gone."

There was also an inmate who claimed that Robinson confessed to him when they shared a cell. It turns out, according to Robinson's attorney Charlie Weiss, "He was never in the same cell as David Robinson, and the prosecution put him on the stand even though they knew he had never shared the same cell."

Robinson was sentenced to life without parole.

But three years later, the case against him fell apart. Another man confessed on tape to a defense investigator that he was the one who sold drugs to Sheila Box, and killed her. In a recording made on August 9, 2004, Romanze Mosby said, "I told her to throw the money, throw the money out and I'm gonna throw her the dope."

Mosby said he panicked when he saw she had a gun: "And that's when I just shot her, because I'd seen a little flash. I was walking up to it and she just raised her arm and that's when I shot her."

In 2009, Mosby took his own life – and Robinson remained in prison, even though, by then, both witnesses who testified against him admitted they had lied.

"I gave false testimony against David Robinson," said Albert Baker, the paid informant. He had been given $2,500 in cash and expenses after he agreed to testify.

And still, Robinson remained in prison, as appeal after appeal was denied.

Until last February, when Judge Darrell Missey ruled the evidence clearly shows that David Robinson did not kill Sheila Box. The conviction, he said, should be overturned because the lead detective John Blakely used "unreliable evidence" to convict Robinson and "ignored or suppressed facts" which pointed away from him.

Moriarty asked Robinson on Monday, just hours before his release, "You're still sitting here. How do you explain that to your family?"

"I can't," he replied. "I mean, I get asked that question every day by staff, by other offenders. But it hurt every time they ask me."

Even the daughter still grieving a mother wonders why Robinson hasn't been released.

"I believe in my heart that he is innocent and I stand by him," said Crystal King. "I lend my support to him and that's how it should be."

The State of Missouri had until the end of May to either retry Robinson, or free him.

His reply: "Hug my mother."

Hours before he was freed, Robinson's brother Reggie told CBS News affiliate KFVS that the family would welcome him home with a barbeque with "all the food that he likes."

"He's already called people and has people on standby to make pies and cakes," Reggie Robinson said. "He's ready to enjoy it."

His mom told KFVS that other family members might struggle to reach Robinson.

"Somebody going to have to wait a long time because I might not let him go for a while," Jannett McCaster, Robinson's mother, told KFVS.