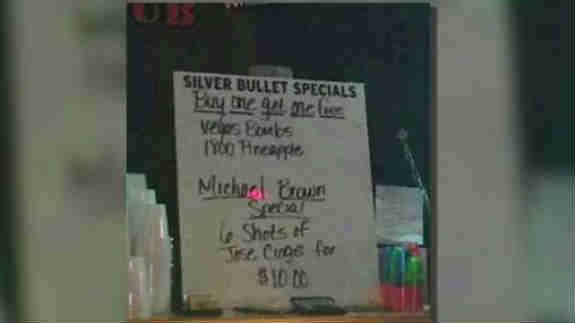 A Missouri bar owner offered his apologies over the weekend after pictures surfaced on social media showing his establishment had offered a \"Michael Brown special.\"

The \"special\" available at the St. Joseph bar, which is near Kansas City, offered six shots of tequila for $10. The number was apparently in reference to the times the unarmed black teen was shot by a white police officer in the suburban St. Louis area.

The co-owner, who declined to be identified to protect himself and his family, WDAF-TV he stole the idea from shot specials offered by other bars in the St. Joseph area.

\"It's not meant to cause any harm,\" he told WDAF on Saturday. \"I should have thought a little bit more about it before I made it a shot special.\"

The owner canceled the Michael Brown shot special and replaced it with another deal making fun of himself.
Share this article: