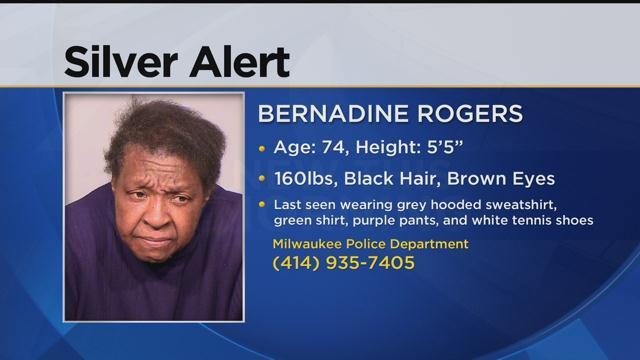 ORIGINAL: A Silver Alert has been issued for a missing Milwaukee woman believed to have dementia.

The Milwaukee Police Department is asking for the help of the public in locating 74-year-old Bernadine Rogers.

Rogers was last seen in the area of 29th and Highland on Milwaukee’s near north side on July 5 at 6 PM.  Rogers is known to frequent the area of N 26th Street.

She is described as being 5’05” tall, weighing 160 pounds with brown eyes and black hair worn in a short afro style.  When last seen, Rogers was wearing a grey hooded sweatshirt, green shirt, purple pants and white tennis shoes.  She was traveling on foot.

Anyone with information regarding Bernadine Rogers is asked to call the Milwaukee Police Department Sensitive Crimes Division at 414-935-7405.