Missing girl returns home, but questions remain why she disappeared 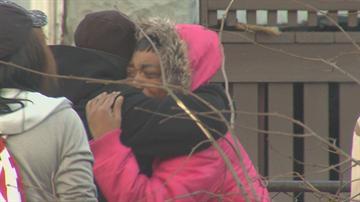 MILWAUKEE -- Tatiana Clayton's family cried tears of joy outside her father's north side home  Monday.  The 13-year-old disappeared a week ago, but showed up at her father's home early in the morning.

\"I didn't ask her nothing, just hugged her and cried,\" father Dennis Rodgers said.

Clayton was last seen November 25th when she was released from Martin Luther King Junior  Elementary School.  Her family said Tatiana had been suspended and  the school contacted her guardian.  The family says she told the school she didn't  want to go home and wasn't allowed on the school bus.

\"I thought the school had the responsibility to at least call back the guardian and let them know that she said she wasn't coming home and that  we'll hold her here until someone is able to come pick her up,\" Rodgers said.

In a statement released Monday, the district said \"[Clayton] was not suspended.  The student was released during the  school day with the consent of a parent/guardian.  Our preliminary investigation has found no evidence that she returned at dismissal time or was turned away from the school bus.\"

CBS-58 tried several times going to Tatiana's home where she lived with other family members, but no one answered the  door.

\"If you're missing from home, let someone know,\" Tatiana's uncle James Clayton said.  \"You know, I don't know what your  intentions might be, but it puts your family through a whole lot of drama, worry,  can't rest, can't sleep.\"

Milwaukee Police are working to find out where Tatiana stayed for the last week.   They told her family not to share any information with media yet.  Her father is just happy to have Tatiana home safe.

MPD has not yet said if their investigation has found any sign of foul play.