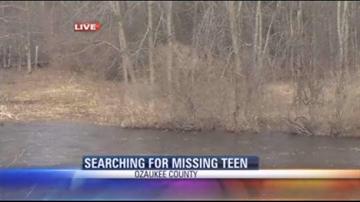 GRAFTON -- A 17-year-old who went missing after launching a canoe in a flooded part of the Milwaukee River has been found alive.

Grafton Fire Chief William Rice said it all started Wednesday around 12:30 p.m. when a  family member dropped the teen and his canoe off at a Grafton park.

The teen felt he was an \"experienced canoeist\", but ran into issues Wednesday night.

He called his mother around 8 p.m.

During that phone call, the teen sounded like he may have been in trouble.

\"He had contacted his mother by phone to say that he had pulled off to the side of the river and was in some distress,\" Rice said.

His mother contacted the Ozaukee County Sheirff's Office, which contacted the Grafton Fire Department, and a search began around 9 p.m.

The Grafton Fire Department searched in and around the river for hours with the assistance of a Wisconsin DNR aircraft.

The teen was able to get to shore, but his gear got wet and cell phone became inoperable, complicating communication efforts.

Authorities called the search off for the night just before 4 a.m. Thursday and resumed just after sunrise at 6 a.m.

About ten minutes into the search, two canoes empty canoes were found--one in Mequon and one in Grafton.

Rice said the teen was found at a makeshift campsite near the canoe found in Grafton, in a heavily wooded area near Lakefield Road.

He was able to pitch a tent, and later started a small fire to keep warm.

The teen is said to be in \"good shape\" and was taken to St. Mary's Hospital in Ozaukee County.

The river exceeded its flood stage in the area this week after heavy rainfall this past weekend.

Although authorities are relieved to have found the teen alive, Rice reiterated that canoing this time of year on rough, flooded waters is not a good idea.