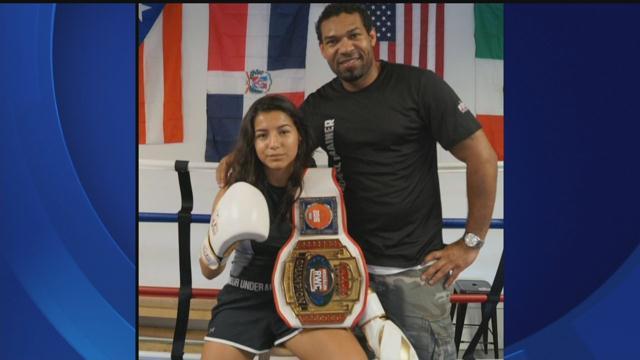 Mireya Marquez,15, of Milwaukee is 2016 boxing champion for the 114 lb weight division in girls competition.

She recently won the belt at a competition in Kansas City, Missouri, organized by US Boxing which grooms Olympic and World Class competitors.

Marquez tells CBS 58 News that her love of the sport is ingrained in her family heritage where boxing is admired and respected and has been for the generations.

"It's something I love to do. It's awesome. Both of my parents have Spanish heritage. So, I was always around it. My family was always watching the big fights. I was around it and I just loved it."

Her boxing coach is Alberto Mercedes of AMC boxing who says, Marquez has able to reach this level in just two years because she's fast, she hits hard, but she also has good technique.

In fact Mercedes says the disciplined learned through boxing can offer structure and fitness to young people. He insists with proper technique, you can minimize the risk.

"You take the kid out of the streets," Mercedes told CBS 58 News. "That's my main thing with the gym. Help the kids stay focused on one thing and not do bad things in streets."

Marquez admits that for as tough as she is in the ring, it doesn't change her kind and friendly nature when she's not boxing.

"Boxing helped me as a person grow. It's really fun. I love it."

Her poise during her live interview on the CBS 58 News at 4 certainly speaks for itself.