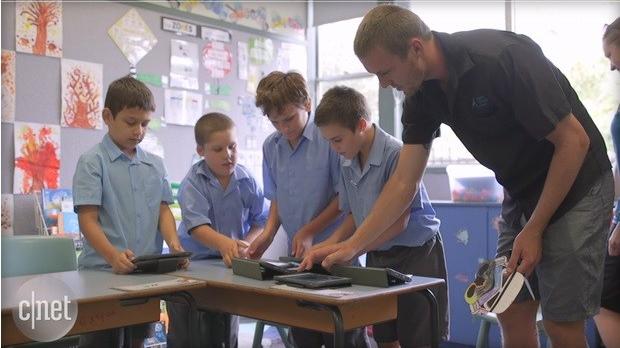 (CBSNEWS) Two hours north of Sydney, Australia, the kids of 3-6 Rainbow, a class in Aspect Hunter school combining grades 3-6, are playing Minecraft. The students are bright, bubbly and talkative -- pretty much what you'd expect from any group of kids ages 8 to 11.

But this class is a little different. It's run for children with autism spectrum disorder (ASD), a diagnosis that covers a broad range of difficulties with social interactions, communication and repetitive behavior. Yet you'd have trouble guessing that as the kids excitedly play together over a networked Minecraft session. Since Mojang, now owned by Microsoft, first released the immensely popular game in 2009, it's found a dedicated fan base of teachers, parents and kids living with ASD.

Before he started playing Minecraft in the classroom, Hamish Ellem, 11, would do a lot of "aimless wandering" at the library, say his parents, Walter and Tracy. "Now he knows there's the Minecraft [section] that he can go to," says Tracy, "and he'll look at lots of other books to try and think 'what can I create in Minecraft?' to challenge himself."

The game is built around mining resources, like ores and timber, and then using them to craft tools, machines and buildings. It's also very logical since players need to gather this, so they can build that. That gameplay "provides information in a visual format and structure, and a certain amount of predictability," says Victoria Todd, a psychologist at Autism Spectrum Australia (Aspect).

Aspect is Australia's leading provider of education, support, diagnostic assessment and other services for people on the autism spectrum. Its teachers like Craig Smith, deputy principal for Aspect Hunter School in the Hunter Valley region north of Sydney, have made Minecraft a big part of teaching classes like 3-6 Rainbow.

Minecraft gives students "a much more understandable version of the actual world," says Smith, because it presents ideas in a straightforward and visual way. Seeing the game's potential, Aspect's teaching staff began designing and testing lessons that integrated Minecraft in early 2013. They learned to play the game, sat in on each other's classes, gave feedback and improved their methods. That experience, along with their expertise in autism, helped Aspect's staff create lessons around Minecraft on subjects ranging from English and science to geography and art.

Aspect made many of these lesson plans available last year by publishing "Minecraft in your Classroom," a free book available for download in the Apple iBooks Store. Smith and co-author Heath Wild include lesson plans and ideas for teachers looking to engage their students with iPads and Minecraft.

Today ASD affects 74 million people, or 1 percent of the world's population, according to the U.S. Centers for Disease Control and Prevention, while recent research suggests there may not be a clear cutoff point. Many on the spectrum struggle to talk to and understand other people's thoughts and emotions as well as their own. This makes it hard for many kids to form lasting relationships with those around them.

That's where Minecraft can help.

Minecraft provides an environment that encourages social interaction as students learn to communicate and play within the game's well-defined rules. Teachers and autism specialists around the world report that, when kids work together in multiplayer mode, they figure out how talk to each other, share ideas and say what they want others on their project to do.

In a situation that mirrors the classroom experience at home, Hamish and his younger brother Harrison are building worlds together. Their parents admit they "don't always get along" but say that Minecraft has given them an interest they can share. They're encouraging and challenging each other in the game -- building their relationship as brothers.

"Students will get frustrated and yell at the beginning, but by the end they figure out how to resolve conflict and use their communication skills," says Jessica Koehler, director of student experience with Sparkiverse Labs, an after-school and summer camp program in the San Francisco Bay Area.

Smith says that same dynamic plays out with autistic children -- they're able to learn social lessons inside Minecraft. By understanding the logic behind why people are expected to act a certain way in a Minecraft context, they can apply those same rules to make sense of real-world situations.

"You could just see lightbulbs going on," Smith says. "I think the kind of life hacks that they pick up inside of Minecraft translates into the real world very nicely -- especially around those social, emotional and organizational skills."

For kids on the Autism spectrum, Minecraft gives a view of the world and the rules that frame it. In the classroom, it helps teachers show students that many things in the real world aren't so complicated.

A look at the chatty and smiling students of 3-6 Rainbow shows what a difference that can make.