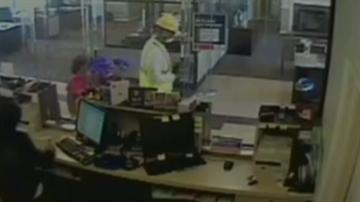 MILWAUKEE -- Bank robberies continue to rise in Wisconsin. For most of 2014, the FBI office in Milwaukee said they are outpacing their counterparts in Chicago.

On Monday, CBS 58 featured a bank robber who is dressed like a construction worker.

The FBI said the man had on a hard hat, construction vest, and is even carrying a lunch box.

The suspects face is covered by a painters/surgical mask and sun glasses.

According to the FBI, this disguise allowed him to blend in with the rest of the bank and not raise suspicion.

The added that none of the construction gear he was wearing had any logos, names, or labels to say where he may have received or taken it from.

During the robbery he also asks for his demand note back, which is something the FBI explained happens about fifty percent of the time.