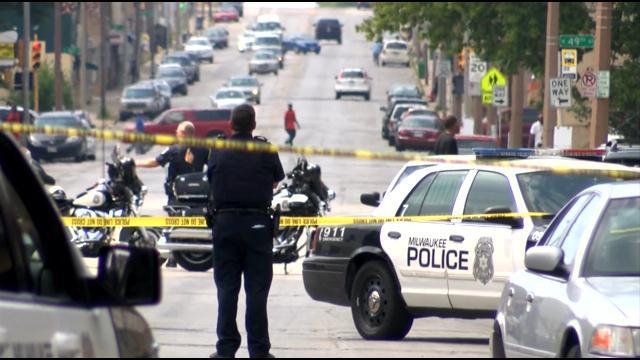 Amid the calm Milwaukee River, a CBS News correspondent broadcasts the brutal wave of violence in the city to the world.

The attention is no surprise to those living among the chaos.

\"It's hurtful and it's sad,\" said Andreal Carson, lifelong resident.

Thursday night, gunshots rang out just a few houses away from Tolefree's. Someone she knows was struck by the bullets.

\"It's terrible that kids can't be outside to play, ride their bikes or even go to a store without gunshots,\" she said.

A park away from neighborhood streets is the safest place for Carson's young daughter. With another child on the way, the mother is on a fast track to leave her hometown.

\"It's too easy to get a gun, too easy to kill somebody,\" said Carson. \"Some of them get caught, but some are still out here.\"

For now, the homicide total stands at 84, nearly twice as many murders per capita as Chicago. Milwaukee's gun violence victims are mostly young black men living in high poverty neighborhoods.

\"Those Americans who happen to live in these neighborhoods should expect their government at all levels to take that problem seriously and all levels don't,\" said Milwaukee Police Chief Ed Flynn. \"It's up to individual cities with what resources they have to try to do it alone.\"

One state lawmaker has called on Governor Scott Walker to issue a state of emergency to combat the crisis. Meanwhile, a city leader seeks to reallocate federal money to community outreach groups. But until a solution is working, a dark cloud hangs overhead.

Homicide victim Tariq Akbar, 14, will be laid to rest Saturday, July 11. His funeral is set for 10 a.m. at Mount Vernon Baptist Church.